For a brief moment this morning I thought we had internet in the hotel room Not so. So here I am in the foyer. and here, finally are some photos. 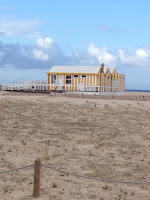 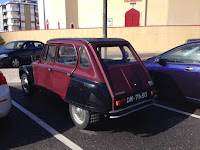 A bonus classic Renault 4L - we also had a red one of these;- 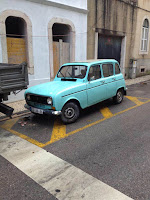 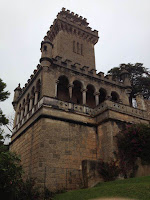 Some time ago I read about teachers expressing concern that children were turning up at infant school without the necessary dexterity to hold a pencil or scissors, or even their knife and fork, correctly. They had spent too much time being entertained on mummy’s iPhone or iPad and not enough holding fat, stubby wax crayons and scribbling in colouring books. (No danger of that with our smallest grandchildren. Both have enjoyed scribbling from an early age. The next youngest, just starting school, can write her name, recognise most letters and a fair few words, and is the most careful colourer I have seen in a four year old. The tiniest watches her mother doing work for her job as a teacher and wants to join in, “writing” on papers of her own. She also tries to “help” her older siblings when they need to highlight notes as part of their homework. Proud grandparent, as you can tell!)

Now I read that a certain Prof Roger Kneebone, a professor of surgical education at Imperial College London, has said students are arriving at medical school without the required manual dexterity to perform simple, necessary surgical tasks such as sewing up patients after operations. Wow! (What a good name for a gentleman in the medical profession, by the way!) Another study found that “frequent smartphone users may be more prone to experience pain in their thumbs” than counterparts who did not use phones as often or at all. You see, I am right not to use my thumbs to write text messages!

Of course, there are some who say that children will soon have no need to write as they will use keyboards for everything. Where will the artists and draftsmen come from if nobody has pencil-control? Where will the hand knitters and embroiderers be found? Is mine the last generation to have such skills.

The hi-tech aficionados also say that surgery and stitching up wounds will also be done by robots in the near future. Such is the modern world.

Another modern world problem is the difficulty of discussing topical matters without being given a, usually derogatory, label. Trying, for example, to discuss gender-identification logically, or indeed to question at all any attitude other that TOTAL freedom leads to accusations of “transphobia”. Here is an article on that matter from the Guardian.

And, on a completely different topic, here is a link to an article about the best way to make coffee. We have become coffee snobs and favour the Moka pots, ubiquitous in Italy. The report says this about them:-

“Yes, they’re cheap (John Lewis is selling Bialettis for £20), but the coffee is often hugely bitter and over-extracted rocket fuel. Priming the chamber with coffee that is ground to the right size is fiendishly difficult and coffee should not be boiled. For maximum character, brew at 90C-96C (194F-205F). Takes practice: 5/10”

What a load of nonsense, our coffee is never bitter and nothing could be simpler to use than one of these little machines.

I do however agree with the comments on Cafetières:-

“In theory, this should be a sustainable and superior option to the moka. In reality, it is impossible – blame steeping it too long, your juddering plunge action, a misjudged grind-size or the way the filter bends at its edges – to produce cafetière coffee that isn’t flat in flavour, full of bitter grounds or both. A gritty 4/10”

Mind you, their suggestion that you should freeze your coffee beans and freshly grind them each time you make coffee, smacks of someone with more time on their hands than most of us have.