Taking control of the streets. 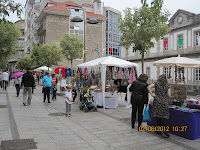 Spain is in crisis and so the local shopkeepers just around the corner from our new bijou residence took matters into their own hands on Saturday morning. I was most surprised when I went out to buy bread for breakfast to find bunting and stalls all over the place. Clothes shops had moved rails of stock out into the street. The chemist’s shop had clearly decided to branch out into something different as they had a stall selling little buns (or should I say “cupcakes”?) outside their premises. 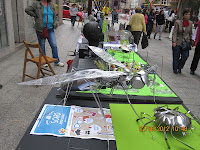 There were numerous stalls selling what can loosely be called artisan stuff: jewellery, bits of pottery, and such like. One stall insisted that all their items were made form recycled materials such as old drinks cans, including this rather amazing giant fly.

Now why would anyone want to buy that? I overheard a couple of street sweepers wondering aloud to each other what it was all about; I wasn’t the only one in the dark then. I spoke to the maker of the giant fly and he told me it was a local initiative by the shopkeepers hereabouts to promote their shops. Well, good for them. 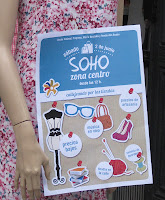 Unfortunately it started to rain later in the morning which must have spoilt things a little. In the afternoon I stopped to buy something at one of the stalls and commented in the weather. It turns out that they had planned this for another date but had changed to because that date had a bad weather forecast and Saturday was supposed to be fine and sunny. That’s Galicia for you. Just when you get complacent about the sunshine it shows you that it can still do proper weather.

Mind you, we are still doing better that the UK which seems to have had quite a bit of rain for the various Jubilee celebrations.

Sunday started cloudy but it was fine and warm enough for me to sit outside La Porchaba with a former student at lunchtime. She’s been visiting the “novio gallego” she met during her year abroad as part of her degree in modern languages. So, as we coincided in Vigo we met up and ate chipirones, jamón serrano and patatas alioli under a sun umbrella. I feel quite flattered that she wanted to talk over old times with me.

Later, as my young was heading for Oporto and a plane back to the UK, Phil and I strolled up to the Castro and admired the view.

Altogether it was a pleasant weekend.
Posted by Anthea at 08:25