Buying postcards on Saturday (4 for €1 or 35 céntimos each – guess which deal I went for!) I earwigged the conversation between the shopkeeper and his young customer. She was about ten or eleven and wanted to buy a fishing net and possibly a bodyboard. I think that’s what you call those fancy shaped floats featuring cartoon characters like Ben Ten. Anyway, she wasn’t happy with the selection: all too small and babyish for her liking. The shopkeeper clearly didn’t want to sell her anything bigger: too dangerous – ¡peligrosísimo! – and too expensive! What a very responsible shopkeeper. In the end she settled for her fishing net and the shopkeeper handed her the change from the note she had given him before the discussion about bodyboards, surfboards and other very dangerous things he didn’t want to sell her. As he held out to her a €10 note, a €5 and some loose change, she looked at him in surprise and told him that she had given him only €5, not €20. What a very honest little girl! I can think of any number of adults who would have walked out thinking they had made a good profit.

By contrast, there is rather rude lady who hangs out around our pool. She clearly thinks that “Prohibido Fumar” doesn’t fully apply to her as I have seen her once hiding behind a large pot plant and twice light up, have a few puffs and then reluctantly go outside the pool area to finish off. Mind you, the whole outdoor smoking legislation needs clarification here as almost all cafes put ashtrays on all the terraza tables, encouraging smokers and making sitting outside unpleasant for non-smokers. No doubt they’ll sort it out eventually.

As you might expect, we see quite a lot of children in the pool. Papás teach their little ones to swim and occasionally show off their own prowess to impress the little ones, or maybe to impress the mamás. In Galicia as a whole, however, I have read that there is still a problem with the falling birthrate. When I read this in yesterday’s paper I was tempted to express my surprise because in Vigo you always see loads of prams on Príncipe. Then I read on to have it confirmed that Vigo has the highest birthrate in the region. Almost all the big towns do quite well. It’s the little places that suffer. So many young people have left to seek work in the cities that there are now small towns and villages where no babies have been born for a year or more.

There is talk of closing or amalgamating schools in these places. Parents are understandably concerned at the idea of their six year old having a round trip of 20 or 30 kilometres every day. Equally unsatisfactory are classes where five year olds are taught alongside twelve year olds or even older children in the same class by the same teacher. It’s rather like going back in time to village schools of the 1920s or 1930s where there was one schoolroom and one teacher for all. That may have had some social advantages but somehow we expect to have moved on from there. 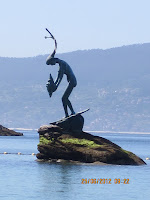 Here in Sanxenxo, though, there s no need to worry our summer heads about stuff like that. There’s the local statuary to admire. 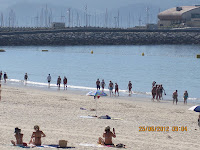 There’s the beach to go to, where you can indulge in that traditional Spanish beach pastime of walking up and down the waterline as many times as possible in a given length of time. 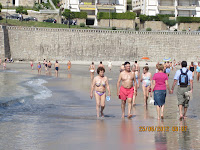 There are tat shops to visit where you can hunt for a little saint to hang from your rear view mirror. In all seriousness, I heard someone moaning this morning because they couldn’t find one. The shopkeeper suggested buying a fridge magnet, removing the magnet and then attaching it to the rear view mirror. A sort of do-it-yourself annoying thing to hang in your line of sight. As you can tell, I'm not a fan of hanging stuff from the rear view mirror.


However, you have to hand it to the shopkeepers around here; they know how to be extremely helpful!
Posted by Anthea at 06:50