Some things change; some stay the same.

Friday was officially the first day of summer, or maybe it was yesterday. Either way, the sun has decided to come out and even the Galicians are tentatively saying that summer has arrived. Fairly late on Friday evening we popped across the road to Casa Puentes to use their Wifi. We ordered beer and our hostess asked us did we want Estrella Galicia or Mahou: they don’t have a pump so cañas are out of the question and it has to be bottled beer. “Estrella”, said I while at the exact same moment Phil said, “Mahou”. Laughing, our hostess agreed with me when I commented, “Estrella es de aquí, de Galicia pero Mahou es de Madrid.” So regionalism won the day and we had a bottle each of the local brew accompanied by a bit or tortilla and some jamón serrano. Total cost: €3. That’s €1.50 each. Last summer in central Manchester, my young friend Craig and I ordered lager and were offered a very badly pronounced Estrella Galicia. As we caught up on each others’ news we gave in and had another one each. Total cost: £15. That’s almost £4 a bottle. And we didn’t even have a single crisp. Even for city centre and sitting outside that’s a bit expensive if you ask me. 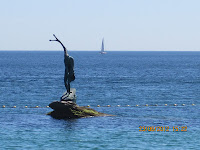 Yesterday, Saturday, we travelled to Sanxenxo. It was the “noche de San Juan” when traditionally people light bonfires and eventually leap over them with the intention of guaranteeing good health for the coming year, the granting of some wish or other, the continuance of their relationship or success in life in general. I’ve come across so many different interpretations that I think you can just put in whatever you like. Not that you’d catch me jumping over any bonfires! Grilled sardines are the traditional food of choice for that evening but this year there is a sardine shortage and the newspapers have been wondering how a country in crisis can afford to eat sardines, even to celebrate Saint John.

Last year at around this time we arrived in Oporto on that date and found São João in full swing there, complete with all the local jokers running around bopping everyone on the head with squeaky plastic hammers. Here in Sanxenxo you wouldn’t have known that it was anything different from any other Saturday night. Later in the evening there was a slight smell of bonfire smoke but it must have been drifting in from one of the bays further along the coast. Here, nothing at all was happening. Mind you, there WAS football on the TV: Spain against France. So the atmosphere was alternately tense and joyful in the cafe round the corner from our hotel. Finally Spain won 2:0 and so everyone was very happy and, when we revealed our Englishness, wished us luck for this evening’s England v Italy match.

Earlier in the day I had rediscovered the delights of the pool, very necessary as the temperature soared to 31° according to one of the chemists’ signs. Now, I run and enjoy my running but there is truly nothing to beat swimming up and down a nice pool, rather like a slow and possibly demented turtle in my case but still covering the distance. I’ve visited friends’ houses where they have pools in the garden but they are always piddling little affairs; a couple of strokes and you’ve done a length. I don’t want a pool like that but I would love to have my own pool of a decent size and a bit of guaranteed sunshine to sit out in for a while on emerging from the water. Pipe dreams, I’m afraid! 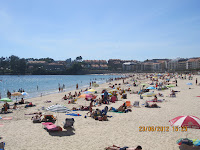 We’ve reminded ourselves of the layout of the town, discovering that “my” shop from last year, a clothes shop called “Anthea”, obviously named after me, has now become “Jockey”. You see, you go away and things change while you’re not looking. The beach is much the same as it ever was, however, and there are still plenty of boats in the harbour. 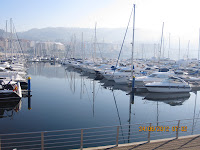 We have also reacquainted ourselves with various chess playing friends from last year. Phil has won his first game. So all’s well with the world so far!
Posted by Anthea at 04:40