Last night it rained so much that I did not think there could be any water left to form clouds this morning. However it managed to rain on me as I ran round the Castro first thing. One thing you can say about Galicia is that it knows how to rain.

In my ongoing search for the ideal bread, this morning I bought something called “pan de nueces”, basically walnut bread. It was sold in little loaves of different sizes, well, two different sizes: round and a little larger than a tennis ball or the same diameter but as little longer and rugby ball shaped. Nonetheless it was sold by weight. Now surely there is so little difference in weight between one small round loaf and another as to make it possible just to put a standard price on it. And as it cost about 83 céntimos I don’t really see anyone saying, “Oh, no, too expensive, weigh me another one!” But there it is. Anyway, it was quite tasty and very crusty.

Later in the day, Phil and I set out to walk to the Castrelos Park, a former stately home set in a big park full of huge mature trees. We like to renew our acquaintance with this bit of nature in the city every once in a while. Whenever I walk through the gardens of the house and oc9me across the abandoned tennis court I am reminded of the film “The Garden of the Finzi-Continis” and expect to see young people in late 1930s / early 1940s clothes riding bicycles down the paths. None appeared however. No ghosts in this park. 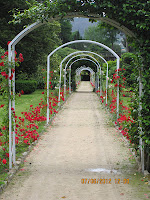 The roses were just a little battered after last night’s downpour but still worth admiring. 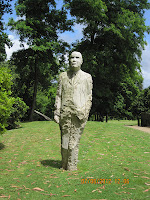 New artwork has sprung up all over the place, some items more appealing than others. I did not know Anthony Gormley had been here and before anyone protests, I do know that his standard men all are modelled on himself and so this could not be one of his. 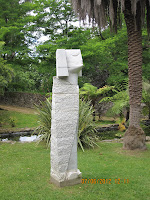 I rather liked the “Anxo Guerreiro” - Warrior Angel but was less impressed by the “Natureza Transportable”. 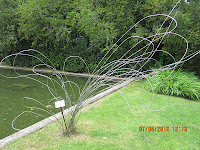 The artwork was all labelled in Galician. No concessions to Castilian speakers this time, although other informative plaques do appear in both languages.

Of course, as I have mentioned before, Galicia is well known to be the centre of the universe. This is why in the free paper there appeared a picture of Bruce Springsteen holding up a child he had invited up onto the stage to sing with him at his concert at San Sebastián, in the Basque Country. The child is from Lugo, in Galicia of course!

And then there’s a lot of fuss being made at the moment about “Os Seis Poemas Galegos de Lorca” at the moment. A chap called Luis Perez Rodriguez has written a book about these poems by the Andalusian poet and about Lorca’s strong links to Galicia. Well, Lorca was interested in all sorts of things to do with languages so it’s hardly surprising that he wrote some poems in Galician. However, when we studied his work at university no mention was made of these six poems. I wonder why not. The author of the book feels that the Día de Letras Galegas should be dedicated to García Lorca one of these years. I’m sure he would be very pleased.

I have a small query regarding the Galicia as the centre of the universe thing. In the free paper they have a feature about Galegos Famosos, asking Galician celebrities to answer some standard questions. They always begin with “a synonym for Galicia” and they usually respond with something like “home”, “homeland”, “peace” or something similar, all very patriotic. Now, if it’s SO great why is it that the Galician writer Rafael Laso says that his favourite book is “The Little Prince” (O Principiño in Galician) by the French writer Antoine de Saint-Exupery? And why is his favourite film “The Unforgiven” with Clint Eastwood, American? And why is his favourite song, “anything by Dylan”, also American?


Don’t get me wrong, I love the place. It’s just that sometimes they get a little too Galego-centric!
Posted by Anthea at 11:55