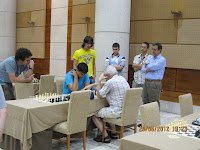 I closed yesterday saying that I had a cena to get ready for. I then looked at the time and realised that it was after 9 o’clock and the chess player had not surfaced. So I went looking for him, expecting to find him deep in analysis of a game. No such thing; he was still playing, surrounded by a host of spectators as this, the last game to finish, was coming to a nail-biting close. Just before 9.30 he finally managed to win it, much to everyone’s relief as the cena was due to start at 10. Just time to shower and go and eat. 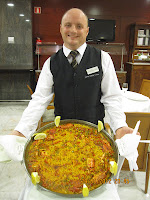 And very good eating it was too with lots of interesting shellfish and huge paella pans full of arroz con bogavante. Delicious! Many toasts were drunk in good, cold albariño wine. A good time was had by all. It was an international occasion: Spanish, of course, English (us), a family of Swedes (who were quite intrigued to discover how much Swedish TV we have been watching lately – we tried to find an occasion to thank them so that we could say “tag” but it never happened), some Portuguese and some South Americans. We even had a birthday in our group, so we had a cake and a song as well. 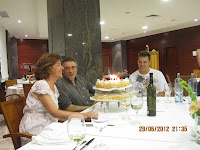 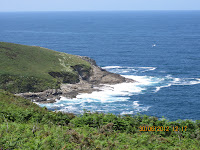 So I went off to the island on my own. It’s not quite so spectacular as the Islas Cíes, just outside Vigo bay, but is certainly worth a visit. You are not allowed to pick flowers or collect shells. However, there is nothing to stop you taking photos of all these things. Nothing must upset the ecological balance of the island and therefore you must take nothing away and leave nothing behind. Looking at my sandy feet before I caught the boat back, I wondered if the ecology police would make us all wash the sand off before we boarded the boat. 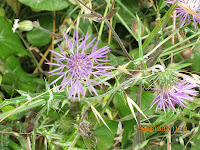 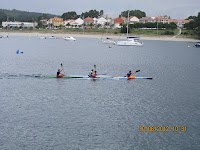 On the way out I had seen canoeists just outside Portonovo but on the way back it was much more spectacular.

The Liga Galega de Traineras had organised a boat race for this afternoon and teams of rowers were working away to complete the circuit of the bay in the fastest time possible. 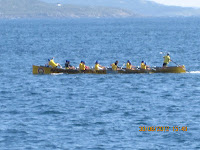 Rowing in the sea like this makes the Oxford and Cambridge boat race seem very sedate. I’m sure the Oxbridge rowers will not agree with me but they don’t have waves to contend with as far as I know. 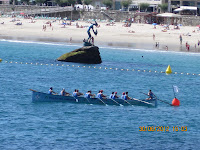 So it was back to the hotel to give the chess player some support. I have been taking him coffee half way through his games to give him an energy boost. This seems to be working. Before he had the coffee today he felt he might be losing. After the coffee, he won in just a few minutes. The caffeine is working its magic apparently.

And so our week at Sanxenxo comes to an end. Last round tomorrow morning and we shall see whether a prize goes with us to Pontevedra, our next port of call.
Posted by Anthea at 14:09