Today, for the first time this year, I went for a run without pulling on my beanie hat and a pair of wooly gloves. We may not be on British Summer Time yet - not this weekend but the next one, I think - but it felt positively spring like out there first thing. One of my dog-walking acquaintances went so far as not only to unzip her jacket but also to take it off and tie it round her waist. We’ll all be sitting out in the garden again before we know it, seeking that little sun trap!

Another dog-walking friend confirmed what I had already surmised: George the Goose is definitely no more. After he had been missing for a few days she and a friend went looking for him and found his headless body in a field above the millpond. It looked as though a fix had had him. “Those bloody swans,” she exclaimed, “They chased him off the pond and now they have b*****ed off again!” Because they have disappeared once more. Fickle creatures! If they didn’t actually finish George off themselves, it seems they chased him off the pond so that he spent the nights in a more vulnerable situation. Nature is not kind and gentle! 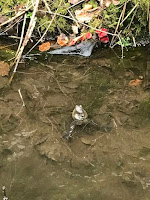 Yesterday disappeared down a sort of rabbit-hole. I was up at first light, awaiting the arrival of my small grandson. After a morning of driving toy cars around, knocking over towers built from coloured blocks and other such activities, we had a late second breakfast and set off too look for frogs again on the Donkey Line. We saw frogs a-plenty and lots of odd, red fungus. Scarlet elf cups, so I am informed by my eldest granddaughter, who specialises in knowing odd facts like that. The rest of the day remained busy. 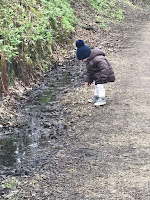 On the Donkey Line we met one of the neighbours, whom the small boy refused to greet, which is unusual for him as he usually greets everyone but may have been because he was intent on throwing stones into the water collected at the edge of the path!

The neighbour was expressing her concern about what was going on with P&O. Her phone had just pinged her the news that the ferry company had just sacked all its workers. “They probably want to reemploy them for less money,” she commented!

Today someone called Clive Savage posted this on social media:

We had a chance to outlaw fire and rehire last year, but Tories vetoed the law.”

Other news yesterday was the confirmation that Nazanin Zaghari Ratcliffe had been successfully reunited with her family at last. Hurrah! Along with Nazanin Zaghari Ratcliffe was Anoosheh Ashoori, a 67 year old British Iranian who has also been locked up, held hostage in Iran, but about whom we have heard little over the last years. His daughter Elika spoke to the press about the difficulty the family had in publicising his cause.  “It has been a very big struggle trying to get my dad’s name out there, we were slightly more successful in the last year of our campaign because of the efforts of Amnesty and other organisations that finally joined us.

“But because of his name, age, his looks, us being grown-up children, and us not being very relatable so we couldn’t really engage on a major scale with the media and public no matter how hard we tried.”

It’s a sad fact about modern mass media that certain causes need to be “sexy” (in the loosest sense of that word) to merit lots of attention. A small girl deprived of her mother makes a more appealing story than grown-up children deprived of their father.

A similar thing happens with the plight if refugees. Amidst everything else that’s going on people are still trying to cross the channel in flimsy, overcrowded boats. Normal rain and wind don’t seem to put them off. More than 900 people were intercepted yesterday, 400+  in 12 y UK authorities and 500+  in 11 boats by French authorities. More than 2,500 people have crossed the Channel since the start of the year, with 28,526 making the crossing in 2021. That’s a lot of people still taking their lives in their hands. But it’s no longer fresh news.

And various people are putting reminders out that while thousands are volunteering to host Ukrainian refugees, which is wonderfully generous, there are still many refugees from Yemen, Syria, Afghanistan, Sudan, Palestine, Iran and Iraq are already here, living in horrible temporary accommodation. We should not forget other conflicts. Just a thought!