Eating out and the difficulty of getting home. Plans that go awry.

Yesterday, after we had eaten lots of curry dishes and sung happy birthday to my friend Heidy, we set off to make our various ways homeward in the middle evening. Together with another of the group I went to the bus stop to catch a bus to Piccadilly Gardens, central Manchester. We saw one bus go past as we said our farewells to the birthday girl but we were not concerned as there are usually a huge number of buses heading towards the city centre. Not last night, there weren’t. We discovered a notice at the bus stop informing us that the bus stop was closed between 7.00pm and 9.00pm because of a Reclaim the Night march. All well and good. I’m all in favour of making the streets safe in the evening for women  (and men for that matter) to walk about in. But there really was no immediate sign of a march.

So we set off to walk past the various bits of the university, heading towards the centre. At one point we passed a host of people going in the opposite direction, seemingly the remnants of the Reclaim the Night March. And eventually, after about 45 minutes we managed to catch a bus. Just as well, as my walking companion has a game leg and some breathing difficulties; in her words, “I have difficulty walking, talking and breathing at the same time.” But we made it safely back to Piccadilly gardens. I left her to catch another bus and went off to catch a tram to Oldham. Once there, neatly half way between buses to Delph, I decided to take a taxi for the final stage of my journey. As ever, going into Manchester is fine but getting home again is a pain!

Today’s plan was that I should go to my eldest granddaughter’s house, collect her and her dog and walk to my smallest granddaughter’s primary school to meet her and then walk back to number one granddaughter’s house. A long walk but not impossible. The small girl was very excited at the prospect. In the event, she had an upset stomach overnight and so did not go to school. Apparently she was in floods of tears at 8.00 this morning because she could not go and more importantly could not be collected by Grandma and big sister. We’ll have to do it another day. 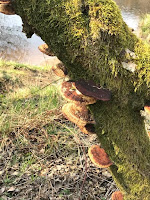 So I went off the number one granddaughter’s house anyway to make her make good use of her day off by walking the dog along the bridle path and back along the towpath. It all went well. We saw some fine fungus. The blossom trees are doing nicely. And nobody fell on the canal, not even the dog! 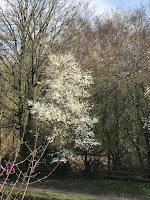 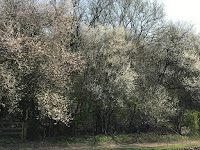 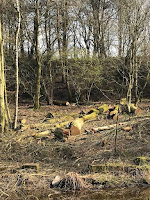