Out and about. Things children notice. This morning, out running, I saw deer on the hillside just behind the village. I’ve frequently been told about the deer in the valley between here and Denshaw, deer between Delph and Castleshaw, but I have rarely seen them. And there they were, three of them, just standing quietly. My phone’s camera doesn’t really have the zoom power to show them properly but I had a go anyway.

Here are some photos from our hike to Heights Church yesterday. 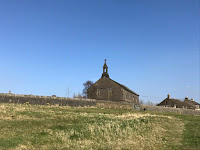 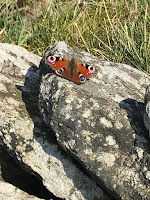 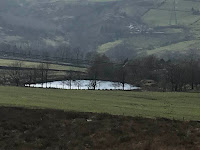 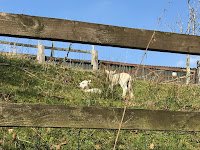 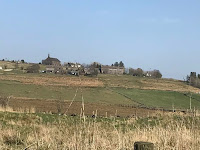 It was really warm and sunny, sunhat and sunblock weather! Today is fine but much cooler. Apparently snow is forecast for the middle of the week. I hope the bees and butterflies manage to get to shelter.

When we go on family walks like that I am amazed by the stuff the smallest members of the family remember from previous hikes, in the case of the smallest one, from a time before he could even speak very much. They work out how the world works from earwigging on our conversations.

A journalist called Seamus O’Reilly has been writing a column featuring his small son every Sunday, pretty much since the child was born. Today he was writing about moving house, always a traumatic experience. He though his small son had ignored the whole business but then this happened:

“The day after our move, we were saved by my sister Maeve, who took our son for the day so that we could get the place ship shape, and he could follow Ardal and Nora around their house, gawping at his elder (four and six respectively) cousins with delight.

He’d spent the first hour in their house ferrying furniture from one Sylvanian Family cottage to another in a toy truck, rather putting the lie to our belief he’d not being paying any attention to the ordeal we were making out of what had been, to be honest, a mostly happy move.

When we went to pick him up, he grabbed the two houses he’d been playing with, so he could bring them home ‘to move house’. We laughed, he burst into exhausted tears, and we did our best to console him. It has, indeed, been a moving experience for us all.”

There you go. Silvanian Families and Playmobil and other such toys have provided lots of opportunities for children to work out things that are troubling them or just going on seemingly above their heads.

A friend of mine who is totally traumatised by the whole business of moving house after 35 years of accumulating stuff in one place could do with some toy houses to act out his stress. Do they provide such things for adults?