Well-dressing and golden toilets. Art forms of one kind and another and a bit of foraging in between.

"Well dressing, also known as well flowering, is a tradition practised in some parts of rural England in which wells, springs and other water sources are decorated with designs created from flower petals. The custom is most closely associated with the Peak District of Derbyshire and Staffordshire.

The custom of well dressing in its present form probably began in the late 18th century, and evolved from "the more widespread, but less picturesque" decoration of wells with ribbons and simple floral garlands. The custom waxed and waned over the years, but has seen revivals in Derbyshire, Staffordshire, South Yorkshire, Cheshire, Shropshire, Worcestershire and Kent.

Wooden frames are constructed and covered with clay, mixed with water and salt. A design is sketched on paper, often of a religious theme, and this is traced onto the clay. The picture is then filled in with natural materials, predominantly flower petals and mosses, but also beans, seeds and small cones. Each group uses its own technique, with some areas mandating that only natural materials be used while others feel free to use modern materials to simplify production." 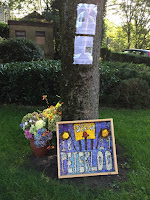 The above information comes from Wikipedia.

Yesterday this appeared in our village, which was once part of Yorkshire.

An explanatory notice reads, “Whilst we are certain there was once a well in the village we have been unable to track down its exact location. Although there are a number of natural springs around Delph, these are in remote areas or on private land so it was decided to site the tableau near the river in a place accessible to the public.” 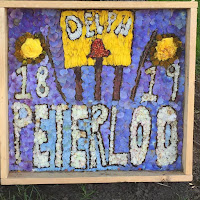 This is the second year a well-dressing tableau has been erected. Last year it was dedicated to the suffragettes. This year it remembers the Peterloo massacre.

I spotted the tableau as I ran through the village in the morning. 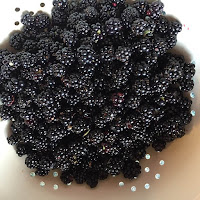 On my run I also spotted a large number of wild blackberries. So later in the day, which had turned out to be fine and sunny, it was a toss-up between doing some gardening or going foraging. Foraging won and very successful foraging it was. 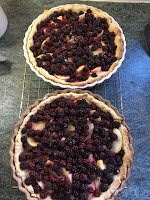 And, of course, the foraging led to the creation of apple and blackberry pies.

Recently I read that Blenheim Palace in Oxfordshire was displaying a solid gold toilet as part of a contemporary art exhibition. The public could pay to use the luxury facility but the time they could spend in there was strictly limited - time for number 1 but not a number 2, as we might have said in our childhood.

And now the golden loo, valued at £1m, has been stolen. Someone broke in on Saturday morning early and unplumbed it and took it away. Inevitably this led to some flooding in Blenheim Palace.

Blenheim palace is the ancestral seat of the Duke of Marlborough. Ahead of the toilet’s installation, the duke’s half-brother, Edward Spencer-Churchill, founder of the Blenheim Art Foundation, said last month the lavatory wouldn’t be “the easiest thing to nick”. “Firstly, it’s plumbed in and secondly, a potential thief will have no idea who last used the toilet or what they ate,” he told the Times. “So no, I don’t plan to be guarding it.”