On decluttering! And photos!

Every so often I half-heartedly start to sort through stuff.

On the one hand there’s that Marie Kondo telling us to declutter, to get rid of anything that does not bring you joy. Well, the dustbin doesn’t exactly bring me joy but I don’t think I should get rid of it. However, it does work with the clothes and I now have a bag of stuff to go to the charity shop.

And then, on the other hand there are those earnest programmes on the radio where they go on about the difficulty of sorting out your deceased parents’ belongings. And I think that maybe I should reduce the stuff that the offspring might eventually have to deal with. I remember my mother going through stacks of photos when she was seriously bed-bound and feeling she didn’t have much time left. She distributed the photos among the four siblings, thus adding to our clutter!

Anyway, yesterday evening I did sort some stuff and I threw out a modicum but I also found a range of photos, photos that have been taken out of albums for one reason or another and never put back in their proper place. So that’s another job lined up for me: get out the old albums and see whether I can put any of the strays back in place.

But the whole business got me thinking about photos. I swear that our new grandson in his, what?, eleven days on the planet has been more photographed than I was through umpteen years of my childhood. Mind you, part of the reason for that is my elder sister having got hold of the camera when she was about four years old. My parents had one of those old box-brownies and whenever they took a picture they would tell us to watch the birdie, so when my sister got her hands on the gadget she began looking for the well-hidden birdie. That was the end of the camera!

But even when it was replaced, it was only used on special occasions and on holidays. Which in our case, as we lived in a seaside town, meant when the Yorkshire relatives came to stay. But there is something about actual printed photos, whether in an album or stuffed into shoe boxes and put away in a drawer. They are a tangible reminder of stuff that went on, as I said usually on memorable occasions. 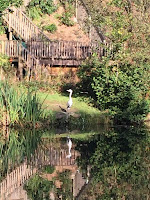 But nowadays we point and click at every opportunity. I do it myself. This morning on my run I stopped to take photos of spiderwebs and of the local heron - he must love me as I managed to frighten him into flight at least three times before he finally settles on the other side of the millpond. And I post a lot of them on Facebook. Indeed, I have a friend who says she looks forward to my almost daily updates - they remind her that there is life after teaching! 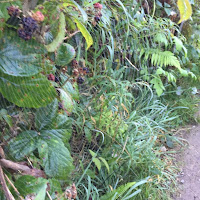 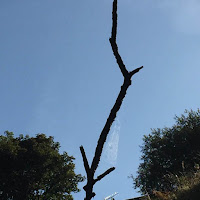 I don’t do selfies though and I don’t do Instagram. I’ve not quite sussed that out. Do the photos posted on Instagram disappear into the ether after a while? If so, what is the point? And so I also find myself wondering about all the masses of photos taken on mobile phones, the photos documenting children’s progress through life, all the milestones they reach. I know they are stored on the mysterious “cloud” but does anyone go up there and look at them? And what about children looking back at their baby photos? I know that our three year year old granddaughter can very ably swipe through photos on my iPad or on my phone but it’s still not quite the same as looking through an album.

Then last night on the television news they interviewed the McCartneys - Paul and his daughters Stella and Mary - because they have just had published a collection of Linda McCartney’s family photos. There are photos of family members doing family things, shots of the cottage they lived in up at Mull of Kintyre, of horses, of Paul cleaning his teeth. Many of them are polaroid pictures as apparently Linda was always taking instant pictures.

(Our daughter had a polaroid camera, briefly, in her mid-teens. It was a requested birthday gift and she was very pleased with it. Unfortunately it was short-lived as she took it out on one of her rambles with friends. A careless friend dropped it down a hillside and it crashed into a rock. Another camera bit the dust!)

No doubt McCartney fans will go out and buy the book even though really those photos are of most interest to the family. But at least the McCartneys now have a lasting record of those family moments. I found myself quite inspired. I should go through all my photos and make a similar family memory book. There are computer programmes that will do this for you, provided I can digitise all the photos. But then I can give both offspring a copy and throw all the old photos out.

All I need to do is organise myself!
Posted by Anthea at 06:34