Okay, that’s that over and done with! 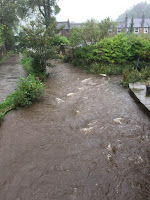 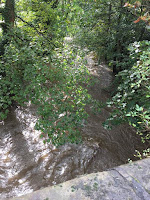 The rain has continued to fall overnight and well into this morning. It is not falling so heavily now but I wouldn’t plan any long walks just in case it starts again. I ran in the rain first thing this morning, stopping only to take photos of the rather swollen river. 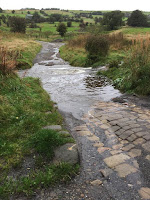 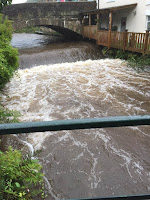 My feet were so wet that I was tempted to tip my shoes up and see if water ran out of them. Yesterday someone told me that nearby Greenfield was flooded. Odd things are going on!

On the question of preserving our planet, once again the way we eat and what we eat comes to the fore. I read that in October 2018 an assessment of the lovestock industry’s environmental impact was made. The authors concluded that although undernourished people around the world could, perhaps should, actually eat more meat and dairy, well, a little more, the average citizen around the world needs to shift to a more plant-based diet in order to prevent catastrophic, irreversible damage to the environment.

The average US amd UK citizen must consume 90% less beef and 60% less dairy. And they reckon that having no animal products for breakfast or lunch would come close to achieving that aim.

Does that mean I should not have milk on my muesli? Am I supposed to go for almond milk or one of the other substitutes? And, oh, I do like real butter on my small amount of toast. But I eat no beef, ever, so does that compensate?

I just half-listened to a programme about sponsorship in the arts. Artists of all kinds are sponsored by nany different kinds of organisations. Saint Martin’s Art College in London is sponsored by at least a couple of big businesses. It’s one way to keep going. What struck me was the group of purists who declared that you should be making art for art’s sake, a nicely idealistic notion, and that once you accepted a commission you were no longer creating art.

I wonder how they thought the great artists of the past managed to get by! I’m pretty sure Leonardo da Vinci and Michelangelo didn’t have the luxury of making art just because they liked the idea of being creative!
Posted by Anthea at 06:14