Festivals - of one kind or another. Sunshine. Some odd facts. Spiders. Dealing with anxiety. 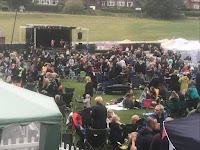 Today is the day! The day of Delph’s “Party in the Park”. Well, really it should be “Party on the Cricket Pitch” but I suppose that lacks a certain cachet. It’s organised by the “Wake Up Delph Committee”. Tribute bands, such as a Blondie sound and look-alike, are booked months in advance. The wicket is covered up. A stage is set up. Stalls and children’s rides are erected and all the parking spaces in the neighbourhood are filled up for the day.

This is the umpteenth Party in Park and today must be the first time in ages that they have had a brilliantly sunny day for it. As a rule it is damp and drizzly, as it usually is the Band Contest in June. So hooray for a bit of sunshine! Tomorrow it is forecast to rain. 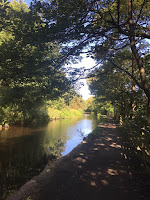 I am not attending the Party in the Park. Instead I have been for a long walk, taking in some fine canal towpaths and a visit to Tesco. I caught the bus back. One lady on the bus asked the driver if he stopped at Delph Station. He was nonplussed. So we had to explain to him that there used to be a railway. Long ago, with a station at Delph Crossroads. All that remains now is the station building, now a private house, complete with platform and a few notices. The line itself is now a bridle path, the Delph Donkey, much walked by yours truly!

Today I have added to my collection of silly names. There is a comedienne I have never heard of called London Hughes and a model who goes by the name of Seashell Coker, surely a professional name if ever there was one.

We have been watching “Peaky Blinders”, the series about a Birmingham gang and their exploits. Consequently we now address each other in bad Brummie accents. Everyone wants a bit of Peaky Blinders- Brad Pitt would like a role! You can download a podcast, if the series itself is not enough for you. And there has been a festival going on in Digbeth, Birmingham - the Legitimate Peaky Blinders. Thousands of people got dressed up in period attire in tribute to their favourite characters. Amazing!

It’s spider season, spider-mating season I am told. I keep catching them and throwing them into the garden of the pub next door. A young friend of mine posted this about spiders on Facebook: “Wish people would stop posting pictures of spiders suffering from arachnophobia after finding one in our flat, last thing I want to see scrolling through Facebook, thanks lol.”

Either she cannot write in proper sentences - which is probably the case, despite my best efforts to teach her to do when she was one of my A-Level French students - or she has discovered that some spiders are afraid of themselves.

If so, said spiders should try conscious, connected breathing. Don’t hold your breath. See below!

If you thought you knew how to breathe, think again. 2,000 people recently attended a breathing workshop run by the “Breath Guy”, aka Richie Bostock, someone who must be doing quite nicely going to festivals and being paid to teach people to breathe. They even have workshops in the House of Commons. The head of the International Breathwork Foundation (yes, that is actually a thing) says, “Conscious, connected breathing is now reaching the world. People are always seeking to find happiness, joy, real love and to be healthy.”

It’s been around for a while apparently. Someone called Hannah Goodman trained as a breathwork facilitator four years ago. “We’ve known about the benefits of conscious breathing, mindfulness and meditation for a long time but we haven’t implemented them,” she says. It’s said to be good to help deal with stress, anxiety, addiction and other health problems.

I think my mother knew about it as she would often remind us to “take a deep breath”.

John Crace, he of the Digested Week in Saturday”’s Guardian should perhaps try it. He writes, “Brexit is definitely doing nothing for my mental health. I feel depressed and my anxiety levels are sky high. I wake up in the morning with a sense of dread - it often takes a huge effort just to get out of bed - and I feel out of control most of the day.”

That probably applies to most of us. Especially arachnophobic spiders!
Posted by Anthea at 08:35