Prime Ministers and Presidents. Weather extremes. And the value of vintage.

MPs are back in parliament today. Michael Gove says his boss has no need to apologise for seemingly lying to the queen. Others are calling for the PM to resign but, despite having lost any kind of parliamentary majority, he appears to be determined to bluff it out.

On the other side of the world Speaker Nancy Pelosi announced that the US House of Representatives would begin a formal impeachment inquiry into Donald Trump, setting the stage for an extraordinary constitutional clash over allegations that the president sought the help of a foreign country to harm a political rival.

The house of cards might be tumbling down around us.

And we currently have no service on our mobile phones around here. They are trying to tell us that it is a problem with a local telecom mast but personally I think it’s Boris Johnson’s fault. If we have to have him as PM I think we should be able to blame him for just about everything.

Someone on the radio has just suggested that all MPs should be locked in the House of Commons and not allowed out until they have thrashed out a Brexit solution. An idea?!

Yesterday afternoon I began to wonder if it was possible to drown standing up, so hard was the rain that was falling on Market Street in Manchester. It was like the worst of Galician rain, a proper “tromba” as they say! Commentators on climate change say that we are having weird and extreme weather all over the world. I would agree with that from what I have seen. So bad was the rain yesterday that I went against all my own rules and caught a tram from Market Street to Piccadilly station, where I proceeded to take a taxi from there to my Italian class. 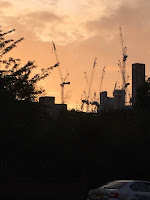 Once the class was over we found the rain had stopped and it had turned into a very pleasant evening. You would not have thought it had been so bad earlier if it were not for ongoing traffic problems. Everyone and their grandmothers had come out in their cars. As a consequence they rerouted my tram back to Oldham - its normal route was clogged up with heavy traffic. I had already encountered travel problems as the train I expected to catch from Manchester Piccadilly to Greenfield failed to materialise. This meant that I had to catch a tram to Manchester Victoria and from there another to Oldham. However because of the earlier rerouting - and goodness knows what other nonsense that was going going on - there were too many trams trying to access Victoria on one line and I had to wait almost half an hour for a tram going my way. Then, typically, three came at once.

A total nightmare! Can I blame the PM for this as well?

Yesterday I wrote about a Cimabue painting found in a French kitchen. Now there are suggestions in this article that this painting may not be a Cimabue at all but a painting of the same age done by a Cimabue disciple or student or simple copier. I have mixed feelings about this. Does it matter if it’s not a Cimabue? If it’s a very old and pleasant to look at painting, does it not still have value? You only need to look at the number of tribute acts going around singing songs by Blondies, the Eagles, Elvis and many, many more and in some cases making a good living out of it.

It’s odd how we put value on things. Here’s an article about people finding bargains in charity shops, prompted it seems by Meghan Markle wearing charity shop earrings. Judging by the sort and quality of things people in that article have found i charity shops I can only conclude that some parts of the country have a better class of charity shops than we have around here.

This goes along with my general feeling that newspapers cater for a posher part of the world than the one I live in. First of all there are the clothes at ridiculous prices - shoes that cost hundreds of pounds are just silly! Then there is the pretentious stuff they put in recipe articles! The latest round of suggested recipes for autumn includes advice on the best way to serve white truffles.

White truffles!? Really!? You don’t find them in our local Tesco!
Posted by Anthea at 05:46