Reminders of Cuba in London! 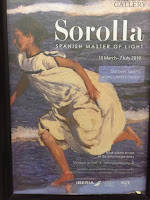 When I was in Cuba in February, my friend and I went to the art gallery in Havana on our next to the last day there. There was a huge collection of work left behind by the fleeing rich when Batista was overthrown. We discovered an artist the gallery there named Bastida, someone neither of us had heard of. Research back in the Uk revealed him to be Sorolla y Bastida, a Spanish impressionist from Valencia, acknowledged by his contemporary artists as a “master of light”, the son of Goya and grandson of Velazquez.


Considered possibly the greatest Spanish artist for quite some time, he was deposed when modernism came along and he was supplanted by the likes of that upstart Pablo Picasso. Now he is making a comeback, specifically with an exhibition in the National Gallery in London, that we went to see yesterday. Well worth visiting, it is continuing until early July. 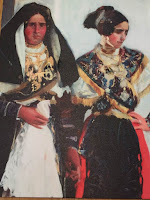 After our dose of culture, including a short film about the artist’s life, we felt the need for sustenance. So we went to the National Gallery cafe and had coffee and cake, although we could have opted for the special Spanish menú del día that they had put on in honour of the Spanish painter. It included quite a lot of chorizo and something called “pardon peppers”.

Oh dear! Almost certainly this was the result of auto-correct and maybe their proof reader had never heard of “padrón peppers”! It’s usually translations of Spanish dishes into odd English that we come across in Spain. What a surprise to see the reverse in our capital city! 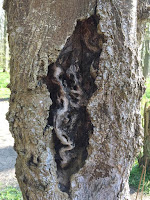 Out and about on Monday I took this photo of a tree which had sort of split open. The interior was gnarled and twisted as if it had been carved.


I was reminded of this photo I had taken of a street corner on Havana, Cuba, where the cement corner end had been carved out into s silhouette of a woman but filled inside with carvings of musical instruments, faces, everyday objects. 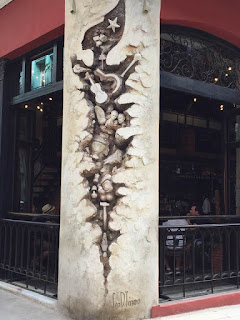 How strange that nature and art could resemble each other so closely.

Having been caught in the heavy rain on our way back from central London to our son’s house yesterday afternoon, today we have travelled back to a very sunny and warm Manchester. And of course, this being Manchester, England, people are out and about with bare shoulders, bare legs, bare midriffs.

Never miss a chance to start the suntan!
Posted by Anthea at 10:28