I suppose that in a place as big as the USA it might be difficult to get everyone to vote on the same day. No, I don't really think that at all. We are in the 21st century. How hard is it to coordinate the voting system? Be that as it may, I have read that some 34 million people have already cast their vote. well ahead of veryone else. Why is that even possible? And now Donald Trump is urging them to maybe rethink the way they voted and go back and change their vote. Who knew that such a thing was possible?

And yet there are apparently six states where early voters are allowed to withdraw their vote and have another go. How amazing!

I know quite a lot of people who think that would be a good idea with the EU referendum, but not just for early voters. There are polls which suggest that now a majority of people in the UK would prefer to remain in the EU. However, while an early voter might just possibly have a good reason to change their mind - propaganda in the press, bullying relatives, the realisation that they sleepwalked into the polling booth - going back and re-voting after the result comes out is a different matter altogether!

In the state of Wisconsin early voters can change their mind THREE times! Now, that smacks of serious indecision. How many candidates do they want to vote for? Maybe they want to have a go at each one and see how it feels before truly committing themselves. Craziness!

Wisconsin made it into the silly news as well. It seems that Thursday was National Sandwich Day in the USA, a chance to celebrate that nation's favourite food. So the governor of Wisconsin, perhaps to prove that he is a good sort who joins in stuff, posted a picture of his sandwich, ham and cheese, the sort he has every day at work. And the internet went bonkers, asking why he was so boring. Here is a sample of that.

The twitter-sphere is quite harsh.

What exactly was he doing messing around on twitter anyway? Even in his lunch hour? Surely he should be too busy governing for that sort of thing

I thought it was just the Iberian Peninsula that had "days" to celebrate all sorts of nonsense, usually food. Pigs ears day. Pigs trotters day. Potato day. All invented by me, I hasten to add. And usually they are fiestas, which allows them to go on over several days so that you can get the most out of whatever is being celebrated. But it would appear that the USA does it too. Maybe it's al those Hispanics and other immigrants that Trump wants to keep out. Anyway, checking up on National Sandwich Day, I discovered that next year November 3rd ill also be Cliché Day. In addition to that, November is National Pomegranate Month, Peanut Butter Lovers' Month and Family Literacy Month.

And we thought November was just about Bonfire Night on November 5th! Surely the fireworks will make up for it. However, the possibilities for extending it are there. Hallowe'en Trick or Treat could combine with the old, traditional Mischief Night, November 4th, and become almost a week long session of begging sweets off all the neighbours. We could organise Parkin Parties and Treacle Toffee Tastings (a bit like the French wine "dégustation"). And we should not forget Take a Toffee Apple for the Teacher Day. The possibilities are myriad. We just need to get organised. This is what social media is all about!

Meanwhile, since I have not included any recently, here are some photos of today's rather excellent fishy lunch! 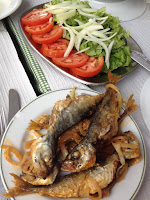 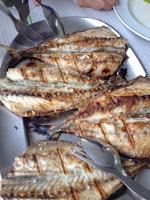 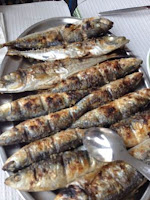 Much better than a ham and cheese sandwich!
Posted by Anthea at 11:07