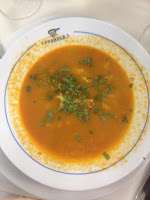 So another Figueira da Foz tournament has come to an end. The great chess festival finished with almost as much ceremony as it started. I am not sure how long it took to hand out eight prizes but, considering that before and after prize was handed over there was a bit of speechmaking and then several minutes of photo taking, it went on for a while. We had managed to arrange a lift to Vigo and our drivers were going on to Coruña after dropping is off. So they were quite impatient for us to get on our way. 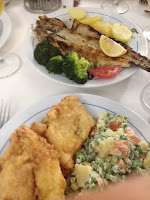 Before the closing ceremony, we had been along to the Caçarola restaurant for a bit of lunch. Soup, fish, wine, dessert and coffee for €8.50 is not at all bad.

We finally made it to Vigo for about 9.30 pm Spanish time. There being no supplies in the flat we took ourselves out to one of our local wifi cafes for a beer and some tapas. Portugal is a delightful place but they don't provide you with free food as they do in Spain, well, in Vigo anyway. With the first beer we got scrambled egg with ham, while the second came with a bit bread, some slices of chorizo and a mound of local cheese. What a nice place this is! I can even forgive it for being rather colder than Figueira.

Meanwhile, the last run-up to the American elections continues. The FBI judge has apparently decided that Hillary Clinton's latest lot of revealed emails make no difference to their judgment that she is ok. Will that be enough to undo the damage? I keep reading that the main reason she is unpopular is that she is a woman. According to the feminists, (hu)mankind still cannot accept the idea of a female president. Is this really the 21st century?

Two stories coming up:
Which bit of democracy do you prefer? How will this election end?
Posted by Anthea at 12:34