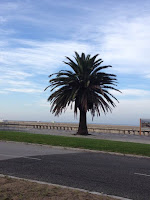 Another day of sunshine in Figueira da Foz. Whoever would have believed that in November I could really relish a cold shower after a run? But that is the case. 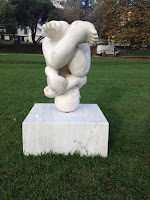 My run now takes in a bit of the town, running through the park with the wierd statues - bits of art for the public - and then back to the beach to finish off on the boardwalks. All good.

In the Guardian, I came across an article about the bad things about living in a city. Here's a link.
There were one or two things I just had to take issue with. We don't exactly live in the deepest, quietest bit of "country" but our village is right on the edge of the Greater manchester connubrbation, with many aspects of small community living. Here are some of the things in the article that I argued with:

• And they(city people)’ll be stuffing their faces with crisps, chips and chocolate when they could be foraging for wild strawberries, hazelnuts or even mushrooms and snails. Away from the city, friendly locals – everyone’s friendly in the countryside, as well as handsome and intelligent – will give you venison that they’ve shot themselves.

That might happen the writer's "place in the vosges". You can find blackberries and bilberries in season around our way but you don't come across anyone giving away venison!! Or potatoes off their allotment for that matter!

• Free loos are few and far between (in the city), while in the countryside the world’s your toilet.

So he's suggesting that in the countryside you can pee and poo wherever you like. Not so! A little respect, please! Dog owners are supposed to scoop the poopl So what about people? And even in France, while it may be easy for a bloke to pee behind a tree, it's a different matter for the girls.

• Speed limits are reasonable and poorly enforced, and you can park pretty much anywhere, so long as the muck-spreaders can get by. Even the most territorial farmer won’t grumble if you stick your Twingo on his grass verge.

Those of us who live in places that are on the edge of open country really appreciate drivers respecting the speed limit. Some of us like to stroll along the country roads as well, preferably without being mown down by speedy drivers.

Meanwhile, George Monbiot has been going around the UK, looking at social problems, as he does, and performing in regular gigs with the musician Ewan McLennan, where they talked about those social problems as well as providing music. Here's something he said:

"But what has struck me with greatest force is this. At the end of every gig, we ask people in the audience to turn to someone they don’t know and say hello. I tell them they needn’t do any more than that, but they can keep talking if they wish. On the first night I made the mistake of mentioning the idea before we had wrapped up the show. That was all it took – the conversation flared up immediately, and it was a long time before I could direct people’s attention back to the stage. After every concert the talking has continued long into the night, in the venue’s bar or the nearest pub. It’s as if people have simply been waiting for permission to speak to the strangers who surround them."

Now, it strikes me that people who would go to a George Monbiot gig are more likely to be the sort who would turn willingly and have a chat with a stranger at the venue. The trick is to take this out into the wider world. Someone recently had very mixed reactions to the suggestion that people should talk to each other on the tube trains. I know people regard it as odd if you speak to them at bus stops, other than to ask if the number xxx bus has gone yet. But half the people on a bus or tram or local train actually spoke to each other, surely it would be a lot less likely that incidents of violence could occur. I talk to everyone. We need a little solidarity in our lives.

And now the last refugee children are leaving the Jungle in Calais. Buses are taking them to undisclosed destinations in France. There are supposed to be UK Home Office workers on each bus and when they reach their allocated juvenile centres, their applications for asylum in the UK and France should be duly processed. Most of them are aged 14 to 17, that awkward age, neither sweet, appealing children nor proper young adults. And they have been robbed of their childhood. Let's hope there is a solution. Some of the human kindness that George Monbiot says we need more of.

Some of the saddest photos are the ones showing the stuff left behind at the Jungle.
Posted by Anthea at 11:09