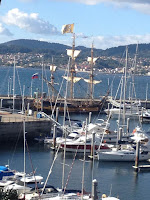 Back in Vigo after a couple of months away, we find some things the same as ever: the same good view from our balcony, the same ever-changing colour of the sea, the same tapas free with your beer. There are still interesting sights to be seen when you go out for a walk, like this boat we saw as we walked the coastal path around A Guîa yesterday.

Out running, I am greeted, almost like an old friend, but not quite, by the chap who hobbles on his crutches down the hill from San Joan do Monte, and by the lady, wrapped up in layers of coat and scarf and more, who walks her dog alongside the Carrefour shopping centre. The weather witch at the breadshop tells me I have clearly brought the cold weather with me. On the other hand, the old lady who walks her old dog every morning, and incidentally describes herself and the dog (a bitch) as "dos viejecitas" (two little old ladies), tells me it is not quite so cold as she had expected. It all depends on your point of view.

Our letterbox was, as expected, full of advertising junk. If someone had ever got around to fixing the lock on the outer door to the entrance of the flats, then nobody could stuff junk in everyone's letterboxes and they would be obliged to leave it all in the box labelled "publicidad". That lock stopped working a matter of weeks after we moved in - nothing to do with us, I hasten to add - and besides, even when it worked people left the door ajar all the time. The main entrance door, fortunately, remains lockable and locked. Less reliably so the door to the lift area.

This was causing problems in the summer and half-hearted attempts were made to fix it. A new door seems to have been installed, which is now easy to unlock, unlike the old one, which needed some key-jiggling on occasion. However, the new door sticks as it closes. Maybe the bottom of it needs planing. Whatever the cause of the problem, it needs a little gentle persuasion to ensure it closes fully, thus maintaining the security of the building. The vast majority of the residents seems to be in too much of a hurry to do this, judging by the number of times I have found the door ajar in the couple of days we have been here this time. Or maybe they just don't care!

I should be amazed at this lackadaisical attitude. After all, this is the country which, nine times out of ten, demands that you sign for a card purchase as well as entering your pin number and, oh yes, showing some form of ID. And this is the place where most bank branches demand that you swipe your bank card to open the door to the premises. Failing that, you press a button to get into a kind of air lock which allows in only one person - at a pinch an adult and a child - at a time and waits until the outer door has closed before opening the second door to allow you into the inner sanctum. Security overkill!

Yes, I should be amazed, but I am not. This is Spain, country of contradictions, where some people wait for a green man at a pedestrian crossing when nothing is coming in either direction. Others do their best to impede a clear view of the road you want to cross by parking in the most ridiculous and dangerous places.

That's enough of that.

I have often expressed surprise at the ability for other nations to do odd things with the English language. Here I go again. There is a food and restaurant guide in France, described in fact as France's trendiest food and restaurant guide. Its name? "Le Fooding"! Where did they find that nomenclature? I have come to accept "le parking" and "le camping". After all, "to park" and "to camp" are verbs and so, with a bit of linguistic license, you can add "...ing" and pretend it's a noun, or at least a gerund. But "food" is a noun in its own right! "Fooding" makes no sense at all!

It came up because a self taught chef from Manchester runs a cafe in a small place in deepest France, a cafe called "Le Timbre" - another name that makes little sense but is at least a genuine French word - which has just been named France's best village bistro. The Mancunian was hoping for a quiet life, presumably with the cafe doing enough business to keep him ticking over. Instead he has been mad busy and has now achieved a bit of fame.

So much for the British being unable to cook!
Posted by Anthea at 12:13