Delivering a bit of sunshine.

After a mostly grey week in Vigo it was nice to wake up to blue sky again this morning. 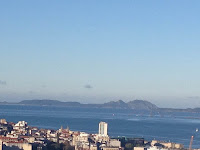 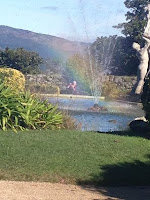 With stuff to do online, I suggested a walk up to the Castro park, one of our favourite place here, and a stop-off at a wifi cafe to deal with the business in hand. Not only was the sun shining but it was positively warm again. Summer has returned once more. It is simply refusing to let go its grip this year. Up at the Castro park, there were rainbows in the fountains. Could you wish for better? Except maybe the pot of gold.

I wonder if the weather has been kind to my Spanish sister, who has been in England, the two of us managing not to meet again this year. Our paths might cross in the sky tomorrow. She and her husband had visited to UK to go to a Paul Simon concert. I confess to a certain amount of jealousy but, judging by the photo on Facebook is morning, they might not have had a very good view. The bigger the star, the bigger the venue they play at, the more impersonal the concert inevitably becomes.

Now, it seems that if you want to meet your musical heroes up close and personal, you should be out and about in your motorbike, looking out for a broken down singer/songwriter. This is what happened to some bikers in New Jersey. Here's the story:

"Coming across Bruce Springsteen on a broken down motorcycle on the side of the road could probably be a lyric from one of his songs, but it really happened for a group of veterans from New Jersey. Bikers from the Freehold American Legion were riding after a Veterans Day event on Friday when Dan Barkalow said he saw a stranded motorcyclist up ahead near Allaire state park in Wall Township. “Bikers gotta stick together,” Barkalow said. “I stopped to see if he needed help, and it was Bruce.”

Barkalow says they tried to help get his bike running, but when they couldn’t, Springsteen – wearing a brown riding jacket and a red handkerchief – hopped on the back of Ryan Bailey’s bike and they headed to a local bar.

“We sat there and shot the breeze for a half hour, 45 minutes till his ride showed up,” Barkalow said. “Nice guy, real down to earth. Just talked about motorcycles and his old Freehold days.” Springsteen was raised in Freehold and still lives in New Jersey. The American Legion post says Springsteen is eligible to join since his father was a veteran. “It was nice to help out,” Bailey said. “One Freehold person helping out another.”"

So there are good news stories after all.
Posted by Anthea at 05:15