According to an article I read this morning, US national parks are “welcoming” so many visitors that they are becoming overcrowded. They’ve had to shut the gates and turn people away as carparks have become so full that emergency vehicles would have difficulties getting in if they were needed. An additional problem is people putting themselves in danger, indeed some of them actually falling to their death, in the desperate attempt to achieve the perfect selfie. As a solution to that problem some places have set up “selfie stations”, providing a safe way to take a selfie while at the same time suggesting good places for an excellent photo, thus avoiding crowding at some of the best known spots. 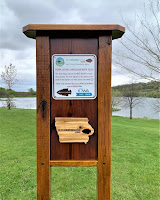 Personally I have never fully understood the selfie obsession. I take lots of photos of places I visit but I never feel the need to put myself in the picture. Do I need to prove I was there? Besides, with all the programmes available for photoshopping pictures you could claim to have photographic evidence of having been almost anywhere in the world.

What the article didn’t address was the question of why numbers of visitors to national parks and beauty spots has increased so much. It’s been happening in this country too. Places like the Lake District have long established paths eroded by the suddenly larger number of people tramping along them. Seaside places have been swamped with litter left behind by people seeking the tranquility of the beaches. Is it a consequence of Covid? Has a period of not being allowed to go anywhere spurred people on to explore bits of the country they previously took no notice of? I suppose restrictions on foreign travel and in some cases reluctance to get on a plane has also led to more people looking for interesting places to visit in their own land.

We stayed close to home on yesterday’s bank holiday. Out picking blackberries with my daughter and her offspring I was reminded of late summers / early autumns of my childhood. There came a point every year when we set off en famille to pick blackberries on the sand dunes of Birkdale, one of the districts of Southport. If you went far enough over the dunes you came to Birkdale beach, in our opinion a far superior bit of beach to Southport proper, but not quite as good as Ainsdale beach, just a little further along the coast.

But it was the sand dunes and the berries that we were after on those expeditions. The berries that grew there were clearly in the blackberry family but significantly different from the ones my father grew on his allotment. Instead of a rich dark black, these wild berries had a purplish sheen to them and tasted subtly sweeter than the cultivated variety. We went equipped with baskets and punnets, baskets filled with a picnic lunch on the outward journey and fruit on the return. Every so often one or other of us would come across a particularly rich patch of berries and the cry would go out, “there are some beauties here”, whereupon everyone would move to that patch and strip it bare. And yesterday, along the bridle paths of Mossley, we found ourselves doing the same thing, although to a lesser degree.

Back in my childhood, we would return home with our booty and after a bit of a rest and some tea we would set about jam making. My mother was in charge. She had a huge brass preserving pan, which had belonged to my grandmother and which she sold years later to an antique shop when her jam making days were over and done with. Jars were set to be sterilised in the oven, also ensuring that they were warm enough not to crack when hot jam was put in them. The fruit and sugar were set to boil in the huge pan and at the right point pectin was added. (Pectin, I am reliably informed in a natural gelling agent found in ripe fruit, but I remember my mother buying small bottles of it to help the jam-setting process.)

Everyone had a stir but in between times labels were written, paper covers and rubber bands were prepared for sealing the jars, and the kitchen table was cleared for action. At various points a small spoonful of jam was dribbled onto a plate to see how well it was setting - a perfect opportunity for tasting the produce as well! And eventually the jam was put into jars, ready to see us through the winter, and occasionally to be taken as my mother’s contribution to “bring and buy” sales at the local church.

We repeated the process with strawberries, blackcurrants and any other soft fruit my father grew, riding home from his allotment with baskets fo fruit precariously hanging from the handlebars of his bike. But it was only the wild blackberries that became a true family adventure. 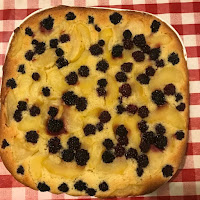 Last night my oldest granddaughter, who likes to experiment with recipes, decided she would make jam with her share of yesterday’s booty. She shared progress with us via our family messaging group, asking for explanations of terminology from her you tube instructions. What, for example, was meant by a rolling boil? All seemed to go well but she fears she may have over-boiled it as it has set rock solid! Maybe she accidentally made boiled sweets. Unfortunately it is set in the bottom of a glass jar and is inaccessible! I on the other hand made a very nice looking blackberry and apple slice, though I say it myself!

Hmm, is there a special term for a food-selfie?