Sunshine, chilly morning, playgrounds and the oddness of things. 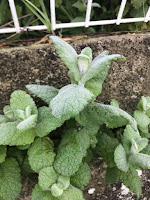 The rain clouds shifted during the late evening yesterday. We saw the moon for a first time in about a week. Still the same old moon! Clear skies meant something of a drop in temperature. It was fine and sunny when I ventured out earlyish this morning. Down at street level the chemists’ signs said 8 to 10 degrees but higher up the hill some of the plants had a touch of frost, an unusual sight around here.

My son sent us a video os his small daughter singing “spring is here!” at the top of her voice in the park in Chesham where they live, so the sun seems to be shining on them as well. Oh, to be six years old and uninhibited enough to sing at the top of your voice in the park. In view of my comments about noisy Spanish children, I hasten to add that my small granddaughter is discouraged from squealing and shouting as they walk down the high street or sit in a cafe. We have standards to maintain after all.

The children’s playground at the corner of the street already had a few occupants even early in the morning, none of them squealing either! We have often reflected on the good provision of children’s playgrounds in this city. Wherever we walk in Vigo we see well-equipped play areas, some very elaborate indeed. How does the council afford such things? Not only children’s playgrounds but there are those street-gyms, encouraging adults to use static bikes, rowing machines, mini-treadmills and the like. They must cost a euro or two!

I suppose one explanation might be the mayor’s money-making schemes. A couple of years ago I read an article criticising Mayor Abel Cabellero for the money he spent on Christmas lights on the streets of the city. We didn’t see them this Christmas just gone but a friend of ours assures us they were magnificent. Not only that, but they brought masses of visitors to the city. Coachloads of people came to see the lights. People came for long weekends to stroll around marvelling at the brilliance. Who would have thought it? Not only did it cheer the place up for the Christmas period for the residents but it brought revenue into the city. Good formVigo!

On a more serious note, I was reflecting on the oddness of the modern world once again. I keep reading about academics being “disinvited” from events at which they were supposed to be making speeches, even keynote speeches. Usually this is because they have expressed a view on some matter, often not at all related to the theme of the conference from which they have now been disinvited, a view which runs counter to what is perceived as the “acceptable” way of thinking. A simple comment is interpreted as being “offensive” to one group or another and the commentator becomes persona non grata. This status usually involves a whole lot of abusive media comments as well.

Freedom of speech, which we take for granted, is in danger of being seriously restricted! But it could be worse. In some places discrimination is more obvious. This for example:

“Victor Orban encourages birth but not immigrants and not lesbian mothers It follows neatly on from the government’s relentless anti-migration message of the past five years.
“In all of Europe there are fewer and fewer children, and the answer of the west to this is migration,” said Orbán in his annual state of the nation address last year. “They want as many migrants to enter as there are missing kids, so that the numbers will add up. We Hungarians have a different way of thinking. Instead of just numbers, we want Hungarian children. Migration for us is surrender.”
Newly nationalised IVF clinics will offer free treatment cycles for all women who want them (as long as they are under 40 and not lesbian), and Orbán recently promised to extend the lifetime exemption from income tax to include mothers with three children.”