Out and about. Avoiding the panic measures! 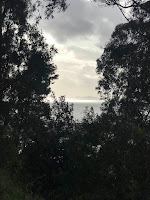 Yesterday I was drizzled on when I went out to buy bread for breakfast. The day improved considerably after that and we walked, mostly in the sunshine but with intermittent cloudbursts, along the coastal path around the A Guía promontory. Constructed with funding from the EU, it’s a nicely paved walk with views of the bay through the eucalyptus trees and their almost overpowering smell. Very good for the lungs I’m sure. It’s a fine example of what EU funding can do. We are always surprised to see so few people as we walk there. Perhaps we walk at the wrong time of day.

On the television in the breadshop/cafe this morning there was a report of a fourth death from coronavirus here in Spain, in Madrid I think. A friend of ours reckons it was brought to Spain by football fans who had been to Italy. Why there should be so many cases in italy remains a mystery to me. A German friend is concerned that her flight from Germany back to her home in the UK might be disrupted as airlines are said to be reducing the number of flights. Once home, she plans to go out as little as possible until the crisis is over and done with.

Others panic in different ways. Friends tell me that soaps and hand-wash are flying off the shelves in the suprmarket. At the Mercadona supermarket next-door to our flats the cashiers, who appear to be well trained in suggesting bargains to shoppers as they pay for their good, are currently promoting hand-wash at a bargain price. All of this soap buying is leading to a lot of comments on social media about the hygiene habits of the public at large. Do these seemingly new soap buyers not usually wash their hands with any frequency? Are they only buying soap because of the advice being given at present about HOW to wash your hands thoroughly? To whit: run water on your hands, add soap and lather up for the length of time it takes to sing “Happy Birthday to you” twice, or “God Save the Queen” twice, or for the socialists and marxists and other assorted lefties singing the Internationale. The social media post that suggested the last option helpfully gave the words along with pictures demonstrating exactly how you should soap your hands.

In the meantime we are carrying on as usual. As I have told a number of nervous friends already, there seems to be little point in stressing too much over something we cannot personally control.

One odd consequence of the coronavirus crisis is the increased sales of books about epidemics and pandemics. Sales of Albert Camus’s ”La Peste”, Stephen King’s “The Stand” and Dean Kootz’s “The eyes of Darkness” are reported to be booming. There is even a novel from 1981 about a fictional virus called “Wuhan-400” - “China’s most important and dangerous new biological weapon in a decade” – which has leapt into third place in Amazon’s charts this week after a description of the illness was widely shared online. There has apparently been a similar spike in the sale of computer games and disaster movies based on pandemics.

Now, does this make people feel better or does it just fuel the panic? A panic which has a friend of mine stocking up with food in case she has to self quarantine. I have seen a splendid cartoon of Pooh and Piglet buying supplies for just such an eventuality: Pooh recommends purchasing pizzas, snacks, chocolate and lots of Prosecco!!