Out and about on a Friday!

Today I went to the dentist for a check-up. As I needed to be there by 10.20 I had to catch a bus before the watershed that allows me to travel free on my old biddy’s bus pass. It cost me an astounding £4.50 to travel to the town centre. This is why I am grateful to have my bus pass. How do people pay those fares on a daily basis? This is presumably why so many people still use their cars.

On the bus a young mother struggled with a little chap who cried on and off throughout the journey, arching his back and flapping his arms around. Teething on the bus, the young mother apologetically told us. Further down the line a bunch of older ladies got on, commenting on the fact that they just manage to use their bus passes but also that the bus is rather empty today. Presumably they go shopping most days. Some discussion went on about people staying at home because of the you-know-what!

I walked from the town centre to my dentist’s in the rather chilly sunshine.

When I arrived there I was interrogated - had I been put of the country in the last two weeks? Yes. Had I been to any of the countries on list on their noticeboard (which did not include Italy)? No. Had I been to Italy? No. Okay, I was good to go? This was more questioning than we underwent going through security at Liverpool airport!

The sun was still shining as I strolled back into town and went to the fruit stall at the market and then picked up a couple of things at Sainsbury’s supermarket. Considering that this was Friday lunchtime, the supermarket was quite busy. But their shelves were still well-stocked. Appeals have been going out around the country for people to remember those who need to use food-banks. Their stocks are depleted as people busily stock up their own supplies. According to my daughter one of the Lidl stores in our area had run out of sugar! Why are people stocking up on sugar? A form of madness!

When I got home the sun was still shining and the temperature had gone up somewhat. So we went out for a walk, spotting signs of spring as we went along. 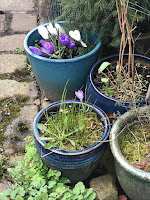 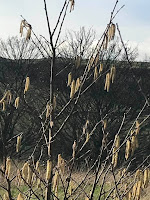 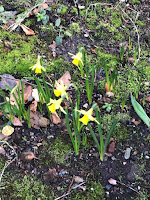 Gardener’s Question Time was on the radio when we returned home. We just caught the end of it as we were checking to see what was on Radio 4. One of the questioners described how she talks to her plants when she is doing the garden. She tells the chickens to get out of the way, warns the cat not to stalk the chickens and then asks the tree what its roots is doing right there! She talks to other plants too but not all. What do the experts think about this?

Members of the panel confess, some of them, that they too talk to plants. One said he sings to his. Research, he explained, has shown that plants respond to music. He joked that they did not respond well to Cliff Richard. Beethoven works well.

This too is a kind of madness.

I do not talk to my plants. Nor do I stockpile sugar, pasta and loo-roll!
Posted by Anthea at 09:18