Reasons to be cheerful? And other such nonsense.

At present life is full of uncertainties. All sorts of things are being cancelled - sports events, holidays, weddings, family lunches, music concerts. Singer-songwriter James Taylor has reluctantly cancelled his tour of North America. Not that we planned to go to the USA or Canada. However, my sister, my Spanish sister, has plans to come to the UK to see the Eagles in concert in London in August. Will we still be in some kind of shutdown at that point? Will she be allowed to travel from Spain to the UK for such a trivial reason? That remains to be seen.

Having raised the question about my sister being “allowed” to travel, an odd scenario crosses my mind. After a month or two of restricted travel, with people travelling within a country being questioned about the reasons for their journey, might this be seen as a way of reducing air travel? For environmental reasons we should all be flying less, so maybe a system could be introduced where you had to justify your journey at the time of booking your tickets. Actually, no, the airlines would never accept such a restriction. Especially as they are currently losing money hand over fist as flights are cancelled for viral reason! 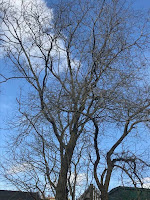 But in the midst of this uncertainly we have a beautiful march day. The year so far seems to have been overwhelmingly gloomy and it is quite delightful to see blue sky and sunshine again, even if accompanied by a bit of wind. So what does a Northwest of England housewife do with such a day? Well, the answer is obvious: a great pile of washing sorted and hung out on the line to dry! Always a beautiful sight - a reason to be cheerful!

Here’s a bit of virus lunacy: the Devil Is A Socialist: Pastor Perry Stone, a prominent conservative Christian preacher, claims that coronavirus is a Satanic attempt to kill older Christians so socialism can take over in the U.S. It’s one way of looking at things. I am astounded that in the 21st century there are still people out there examining the struggle between God and the Devil. I am astounded also at the fame achieved by some of these preachers / religious fundamentalists in the USA. I was about to say we have no such thing in the UK, no religious leaders influencing politics, and then I remembered the chief Rabbi and his statements about certain politicians during the recent elections.

Moving on to other matters, a day or so ago a couple of tinkers came and knocked on the door offering gardening services - tidy up the front garden, put in a nice selection of plants! Of course, I recognise that I am indulging in a certain amount of socio-racial stereotyping here but after they had gone Phil and I looked at each other and said “I think they were tinkers”, going back to our 1950s childhood when random men turned up at the door offering diverse services. On this occasion I did not even see them but I heard the discussion and listened in something like horror as Phil seemed seriously to be considering it - nodding and asking if they had a leaflet, maybe talking prices. My relief was palpable when he told them he would leave it for now, especially as they did not have a leaflet or business card. My front garden is pretty dormant right now. It looks rather abandoned, it has to be said. In a few weeks though the aquilegia will have sprouted anew, as will the poppies, and the garden will be a wild cornucopia! Another reason to be cheerful!

And now for a bit of language. On social media someone posted a bit of Icelandic, for some reason or other. “Ég tók hann í bakaríid”. The last letter was not actually “d” but some symbol I have not found on my keyboard. It means literally “I took him to the baker’s” but is used to mean “I gave him a good telling off”. The only similar expression I could think of in English was “to take someone to the cleaners” meaning dupe or defraud; to wipe out financially. This term may have been derived, apparently, from the older to be cleaned out, which dates from the early nineteenth century and has precisely the same meaning. The current cliché is American slang dating from the mid-twentieth century, when commercial dry-cleaning establishments became commonplace, but it probably originated, like the older term, among gamblers.

There you go: a bit of inconsequential linguistic stuff to brighten up your day!
Posted by Anthea at 06:43