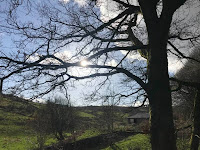 On Friday I posted a picture of our social distancing walk on Facebook and my Spanish sister had a little moan about the fact that she is not even allowed to do that. Mind you, yesterday morning she sent me a good morning photo of her smallest grandson, only weeks old, and I know full well he does not live with her. So some sneaky visiting must be going on.

I wondered if the situation was different in rural Spain from urban Spain as regards going out for solitary walks. Then I read this bit of a blog, accessed via my friend Colin’s blog:

Extract from Chronicles of the Virus Day 6,Spanish views from a small town

Thoughts from a transplanted American on life in rural Spain.

By Maria, who was writing about having been out for a walk.

“When I came back and resumed reading the online news, I discovered that the fire brigades will be deployed on lanes in the woods and on the hills to make sure that no one breaks quarantine. In other words, no one is allowed to go for walks in the woods to take a breather, even if no one else is going for walks in the woods to take a breather. We are confined to our properties. My problem? That the winter was so wet that our field will still pull me down and try to swallow me if I should venture out to cross it from one end to the other to get some exercise. Parts of it are firmer, such as where we want to put in the potatoes, but others feel like a swamp creature is awaiting beneath the surface. Sigh. At least I can still take the trash.”

Our family at this end of the country is split into three groups: Phil and me in one house, our daughter, her partner and most of her offspring in another, only fifteen minutes but a whole quarantine away, and the oldest granddaughter and her partner and the daft dog in yet another, some 40 minutes away. So far we have been quite assiduous in our observance of social distancing. Yesterday we had a first go at doing a bit of video conferencing via Messenger. No doubt we will refine our technique as time goes by. Quite what we will do about celebrating the second granddaughter’s 17th birthday towards the end of the week is a different problem.

It’s not all gloom and doom. The environmental uptick is that not only shoals of fish but swans and dolphins have been seen on the canals of Venice. It’s an ill wind and all that!!

Jokes are abounding as well, in typical British fashion. Here is a link to a story about lasagne the size of Wembley stadium.  My favourite so far is the one where people post a note saying:

“They said a mask and gloves were enough to go to the grocery store. They lied; everybody else had clothes on.” 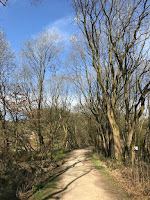 So today I have done yet another social distancing run along one of our bridle paths, passing two dog walkers and nobody else out and about. 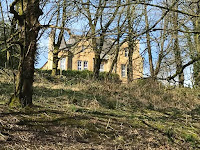 But will even this have to be curtailed? I have not been into the local co-op to buy a paper but I did read this online:

“The police could use emergency powers to enforce rules on social distancing and reduce the further spread of coronavirus, the London mayor has said, amid concerns about mixed messages from central government on the issue.”

It seems people have been leaving London for supposedly safer places:

“Following scenes of packed beaches and parks over the weekend, and worries that people fleeing cities for more remote parts of the UK could overwhelm less well-resourced local health services, Sadiq Khan urged people to stay at home if at all possible.”

“London is considered to be several weeks ahead of the rest of the UK in the spread of coronavirus, and while public transport use has fallen sharply and pubs, clubs, restaurants and other venues were closed on Friday, this weekend people in the capital have flocked to parks, markets and other destinations.”

“There are also concerns about the virus being spread by people fleeing from London and other cities to the coast or other destinations. On Sunday the leader of Plaid Cymru, Adam Price, wrote to the Welsh first minister, Mark Drakeford, demanding that people be prevented from travelling to second homes or tourist accommodation such as caravan parks, lest they overwhelm local health services.”

Before Spain exploded into huge numbers of cases, my Spanish sister reported the arrival in her town in Andalucia of folk from Madrid who have summer residences there.