Out and about in Vigo again. 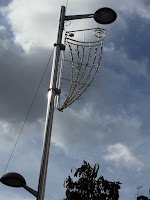 It’s amazing how dark it still is at 8.00 in the morning. Next weekend the clocks go back. Imagine how dark it will be then. People going to work in the gloom. Children walking to school in the dismal dark. But at least it was not raining when I got up and ran up the hill, something I have not done for a couple of months.

Nothing much has changed on my running route here in Vigo. All the shops are festooned with Hallowe’en stuff. One shop I saw wishes everyone a Happy Autumn, in English, a greeting I don’t see around in the UK. Despite all this more immediate festivity, Christmas seems to be coming on apace. The lampposts on our street are already decorated, waiting presumably for the great switch-on.

And in the supermarket they are selling pannetone and turrón. Maybe somebody should introduce them to the delights of British mince pies. After all, if they can sell Italian pannetone, why not British Christmas stuff as well?

I run perhaps three kilometres most mornings, but I don’t do marathons or other endurance events. When I watch the Tour de France on TV I see the cyclists receiving packs of foodstuffs they can just suck out of a kind of tube. Presumably some of these are energy gels. Yesterday I read a short article about how a spoonful of mashed potato is just as good as these energy gels at providing energy for athletes on the go. The research quoted in the article is “supported by the Alliance for Potato Research and Education”. So maybe the research is a little biased but I rather like to imagine cyclists and marathon runners sucking pureed potato out of plastic sachet.

The article also suggests honey, probably sticky even when taken from a tube, pureed fruit pouches such as can be bought for weaning babies, good for the fruit sugar but low on carbs, raisins and other dried fruits - I now have the picture in my head of runners digging raisins out of the little boxes my smaller grandchildren like to have as snacks on the go - and finally guava jellies “For years, Colombian cyclists have been fuelling on bocadillo de guayaba, a kind of solidified guava jam rich in carbs and really tasty, like a bigger, classier, fruit pastille. The traditional form comes in small red blocks, wrapped in dried leaves.”

By midday here in Vigo the sun had come out and the sky was mostly blue. The temperature had gone up from 13 to 18 - not bad! How long this can last is debatable. My weather app promises rain tomorrow! But at least we managed a walk in the sunshine today.

Yesterday evening I saw an article claiming to explain what Mr Johnson’s deal offers us. Following on from stuff about Ireland and the cost of the “divorce”, came this:
“Legal copy-and-paste Highlighting the sheer scale of Brexit, the bill allows for EU law to be retained under UK law, as needed, even at the end of the transition period.”

One beguns to wonder just what is the point! Especially the last item about EU law. Those who have gone on and on about how they don’t want to be ruled by Brussels will not be best pleased!

Meanwhile, we still wait to see whether Mr Johnson can push the whole business through and whether or not we will still be EU Europeans when we return to the UK!
Posted by Anthea at 12:39