October weather and activities. Odds and ends of stuff in the news.

Today is the second of October. According to a Sicilian friend of mine, today is “La festa dei nonni” - “Grandparents’ Day”. Well I suppose we also deserve a day. So far, thank heavens, I haven’t seen cards on sale in this country to celebrate the event, no doubt it will come. 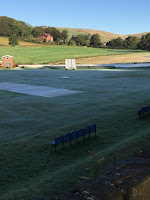 Today is the second of October. When I went out running first thing there was frost on the grass at the cricket ground up the road and cars had frosty windscreens. My hands were frozen too. It was, however, a beautiful day. 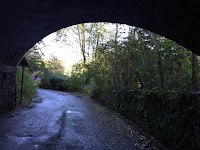 My daughter and I set off mid-late-morning on a long walk in the sunshine, taking in a visit to a local cafe, doing a bit of shopping in Uppermill and then meeting Phil on our way home at “the coldest place in the world”. This spot, where the road goes under the Donkey Line bridle path is always chilly, even on the hottest of summer days. We named it “the coldest place in the world” some thirty years ago and the name has stuck.

As we passed “the coldest place in the world” we were rather shocked to see a large and hairy man dressed only in his trousers calling for his dog, which presumably had escaped. I think he was as shocked to see us as we were to see him, for he scuttled back inside his house, seemingly abandoning the search for his dog.

Later we wondered if this was the same dog we had seen earlier in the day as we set off on our walk. A car had pulled up alongside us and the driver had asked if we recognised the dog sitting on the back seat. She had found the dog wandering along the road on his own and was now driving around trying to find someone who knew him. My daughter, fount of much strange and arcane knowledge, gave her information about an organisation she could contact who would scan the dog to see if he was chipped. Such a thing was well beyond my canine-related knowledge.

According to the weathermen tomorrow will revert to wet and windy. Hurricane Lorenzo is on his way! So it is just as well we took advantage of today’s sunshine.

I just now read that Bernie Sanders has had heart surgery for an artery blockage and is canceling events until further notice, according to his campaign office. The 78 year-old is doing well by all accounts but some people are saying that the Democratic 2020 frontrunners are too old. Who can they find to stand against POTUS Trump in the next presidential race? Surely there must be someone!

I was also reading about a Spanish law allowing descendants of Sephardic jew expelled from Spain centuries ago to apply for Spanish citizenship. 132,000 people have applied, many from South American countries but also from many other countries around the world, this despite the need to take tests in Spanish language and culture, to prove their Sephardic heritage, establish or prove a special connection with Spain, and then pay a designated notary to certify their documents. That last requirement does not surprise me in the least; almost everything needs a designated notary to certify it in order for the notary to earn his bread.

Portugal had a similar law. I was interested to read that the Jewish Community of Oporto – which, along with the Lisbon Jewish community, certifies applicants – said it had received just five applications before the Brexit referendum compared with 400 in the two months following the vote. The Jewish Federation of New Mexico also recorded a spike in applications following the election of Donald Trump as president.

Does this have anything to do with the political situation in the world at the moment? I wonder!
Posted by Anthea at 09:38