The girls on reception in our hotel must be quite accomplished liars for they assure me that my Portuguese is very good. Either good liars or easily impressed. My Portuguese is a mixture of Portuguese, Spanish and Italian. My French doesn’t seem to get into the mix, perhaps because it does not seem to me to be as closely related as the other three, despite being another Latin language. I can usually work out how to say stuff in Portuguese - I have, after all, listened and repeated my way through the Michel Thomas CDs - but I have not had enough speaking practice. Consequently when a vocabulary gap comes up, Spanish and Italian pop up to fill it.

But I’m getting by and it’s fun trying. And my efforts did result in my organising to have a hairdryer delivered to our room. 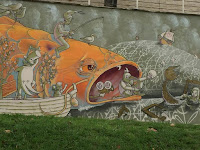 Walking around Figueira I have spotted some very fine street art.


Some old. Like this fishy picture outside a school. 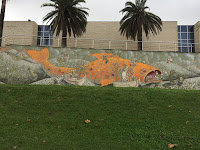 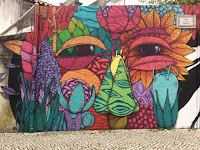 
There is, of course, meaningless graffiti as well but some things have clearly had a lot of work out into them. 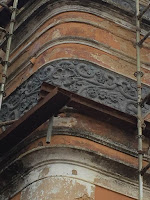 I also saw a building under renovation. Many of the older buildings have very ornate decorative work on the exteriors, including carved or moulded window tops, for want of a better term. 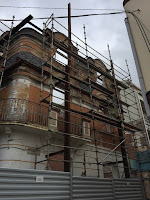 The building in question has been totally gutted inside but the external structure remains whole, which should mean that when the work is completed it can have a modern interior but retain the elegance of its old self.

The best of both worlds!

This reminded me of something I read about Wendell Pierce, the actor. He is appearing in “Death of a Salesman” in London’s West End and has been on “Desert Island Discs”, something I must listen to on catchup some time soon. His family’s home in New Orleans was wrecked by Hurricane Katrina back in 2005. According to the actor his parents found this very traumatic. He said, “I have seen my parents in grief once before when my older brother died. He died about five years before. I saw them just become these diminutive fragile souls. And then I saw it again that day when I brought them to the house.” He went on to rebuild it from the inside out. “I knew that if I demolished the home it probably would demolish them.” Good for him!

We lunched yesterday in a small restaurant in a side street - the one I thought Phil was trying to find on Sunday. We discovered it a few years ago but last year it was closed for refurbishment. Now it is open again, still serving good, fairly basic dishes bit in copious amounts at reasonable prices. I wanted a mixed salad to follow the soup I had to begin with, and debated with myself on the size to order, small, medium or large. It’s a good job I went for small as it was enormous! Goodness knows how much you get in a large portion - a whole lettuce patch perhaps.

I walked down from our hotel to meet Phil at the chess venue last night through quite thick fog. The sea mist must have come in to cover the town. This morning began with cloud and then heavy rain. I walked out in the late morning, dressed for blustery autumn, only to find myself shedding layers as the sun came out.

Several seasons in one day!
Posted by Anthea at 06:00