Uppermill village - well, according to some people it is big enough to be called a town now and it does have its own Big Issue seller - still has a butcher and a baker but, as far as I know, it has no candle stick maker. It does have a hardware shop so I expect that if you absolutely must have a candlestick they can probably put you in touch with a candlestick maker. There is also a small greengrocery, a fancy delicatessen selling olives and sun-dried tomatoes and so on, and a coop store. Otherwise all the shops are expensive boutiques, one for adults and several for children, which says something about the current population, lots of cafes and eateries of one kind or another, including a good number of pubs, and almost as many tat shops as there are cafes. Oh, and a florist.

The florist and the tat shops yesterday were doing a roaring trade. As I walked through the village on my way to the supermarket, stopping off en route at the deli, the baker’s and the greengrocer’s, shopping small, as I am told it is called, I was amazed at how many people were running round with bunches of flowers. Almost as many were coming out of the various tat shops with neatly wrapped parcels. It was like an extreme version of a Sunday in Galicia when you see loads of people coming put of the baker’s with fancy cake boxes, on their way to tea with the parents.

Of course, today is Mothers’ Day, what we used to call Mothering Sunday when I was a child. Apparently it was once the one day in the year that girls “in service” had a completely free day so that they could go home and clean house for their mother! I wonder how many of those with their bunches of flowers were planning to do some cleaning and maybe a bit of repair work.

After today, overnight I expect, all the “Ideal present for Mum” displays can come down and Easter Egg displays can take prominence. The eggs have been around since Christmas but now they can take centre stage! 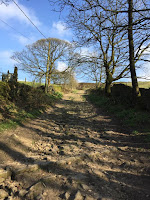 In the mid-afternoon yesterday, as the sun was shining nicely, Phil and I went for a walk up what we call in our family the “quarry road”. It has a proper name - Lark Hill - but half way up there is a small abandoned quarry, hence the family name. It goes quite steeply up hill and I defy any vehicle other than the most robust of off-road vehicles to drive up there. Every time we walk up there the road seems more rough and rocky and the various craters seem larger. 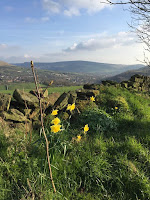 I can only assume that whenever it really rains, like it did recently, torrents of water run down the road, washing away even more of the soil from between the stones on the road. Judging by the amount of silt that collects at the bottom of the hill and runs down the road in a sludgy mess, this is almost certainly the case.


The steep, rather exhausting walk is worth it for the views. 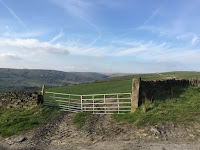 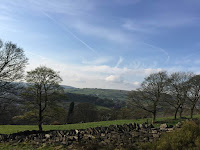 And coming down was much simpler. 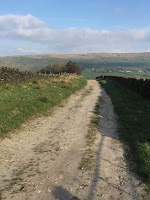 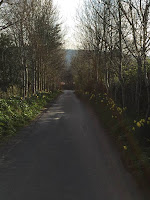 On our way we came across the parents of one of Phil’s chess prodigies, doing more or less the same walk in the opposite direction. We have known the chess prodigy since he was a small boy who had chess training with Phil. Now he is studying, or as I should say, “reading” French and Spanish at Oxford. This academic year he has been doing his year abroad, which in his case has involved six months in Paris followed by six months in a small village in Paraguay. Talk about a contrast! The internet connection over there is limited. He manages to phone home every few weeks. It’s a bit different from a posting to somewhere in Europe where parents can go and visit for a weekend!

Long ago somebody told me “les voyages forment la jeunesse”. If he does not get some training from this experience I shall be most surprised.
Posted by Anthea at 06:33