Living in a parallel universe!

It seems that yesterday, or maybe the day before, a month’s worth of rain fell on Greater Manchester in the space of 24 hours! Reports of this were accompanied by photos of road underwater, steps going down into flooded areas and so on. 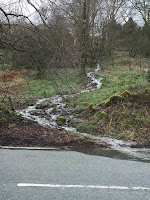 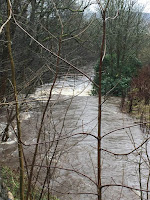 I can believe it. Here on the very edge of Greater Manchester we have the river bouncing along at top capacity, manhole covers converted into mini fountains as water spurts up from underneath them, and a whole new stream running down the hillside onto the main road, which is already running water as if it were about to go out of fashion. 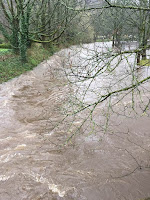 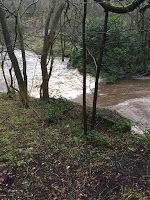 Tonight I am supposed to put out our paper and cardboard recycling for collection. (The system works on a three week cycle: one week paper and cardboard, the next week glass and plastic [now much reduced as they will only accept certain plastic items, principally plastic bottles, without tops!] and the final week general rubbish [now containing the plastic items which the local council will not recycle !]. Every week, thank goodness, they collect compostable stuff - food waste and garden waste.) I fear that the refuse collectors will find a bag of papier maché when they get to our house.

In a news item the other day I heard a throwaway statistic about the UK and internet usage. I don’t remember the statistic but it was very congratulatory about the very high number of households in the UK which have access to internet and have a computer in the home. We sort of take it for granted. I go to stay with family and friends and simply log my iPad onto their wifi. Easy peasy!

Then I came across this article about the nightmare of applying for universal credit. People are expected to apply online but a report last year revealed that just over half of people on low incomes do not have broadband in their home. Added to that 21% of the population do not have basic digital skills. I read further and found that claimants have to record 30 hours per week of jobhunting. They do this in an online journal. Hard enough in itself if you have to go the library to complete it. But there is more. “People are expected to monitor their online journals in almost real time. They get notifications for meetings and instructions in their online journals,” says Kayley Hignell, Citizens Advice head of welfare policy. “But many of our clients don’t have the internet at home or lack digital skills and may not get these messages. They then run the risk of getting sanctioned.”

You need access to internet to find a job and make your benefit claim but you need a job to pay for your internet connection. Catch 22 strikes again!

A similar kind of “everyone can use a computer and has access to them” way of thinking has clearly been used when dealing with applications for settled status by EU nationals living here. I have seen numerous posts from the Forum for EU Citizens (the three million) about how difficult it is to access the application system. And yet according to Amber Rudd the application system was going to be “as easy as setting up an online account at LK Bennett”.

(LK Bennett, by the way, in case like me you had never heard of it, describes itself as an “affordable luxury brand”, selling shoes, clothes, handbags and accessories. It is a favourite of a number of high-profile women, including Theresa May and the Duchess of Cambridge.)

The campaign organisation “the 3 million”, which represents EU citizens living in the UK, accused Amber Rudd of trivialising the application process. “We had to Google LK Bennett, a popular chain with the upper middle class,” a statement said. “It just shows how detached the government is from the real concerns of the average EU citizens.”

Some people just live in a different sort of world to the place inhabited by the rest of us. Eva Wiseman, writing in yesterday’s Observer magazine,  talked about people travelling by air with babies or small children. Apparently the thing to do, if you live in a world of privilege, is to prepare ‘goody bags’ for all your fellow passengers. These contain ear plugs and sweets and an apology in advance for any disturbance your offspring might cause. How do you fit that into your hand luggage?

Eva Wiseman agreed with me that it is hard enough to organise yourself to travel with toddlers without going into presents for other passengers!

Where is this parallel universe that these people live in?
Posted by Anthea at 07:05