A bit of a nostalgic rant on recycling. And a weather forecast.

Just as we left Galicia to come back to the UK a few weeks ago, the supermarket next door to our flats stopped selling customers plastic carrier bags - 2 céntimos for a small one and 3 for a large one if I remember rightly - and started using paper carrier bags instead. Rather nice looking brown paper bags they were. I was quite taken back to my childhood and youth when plastic bags were a thing of the future.

As a student in the late sixties I had a briefcase of sorts but I rarely used it. Anyone of discernment bought a paper carrier bag, usually with some trendy design on it, and carried their books and files around in that until it fell apart. Well, the girls did anyway. I can’t for the life of me remember what the blokes did. Quite probably they carried battered brief cases. After all, nobody wanted to be seen with a brand new briefcase.

It’s rather like my old school satchel. At age 12 I was really proud of my smart new satchel, ideal for going to a new school. By the time I was 15 or 16 and my parents proposed getting me a smart briefcase I turned the offer down. By then my satchel was scratched and battered and had fallen apart and been stitched back together again more than once. It was perfect! I kept it going through sixth form as well.

I was less fortunate with my green school gabardine. When it was bought, brand new and several sizes too large so that it would last, it sort of drowned me. However, it kept me dry and warm and had a splendid hood for days when I wanted to hide the fact that I had forgotten my school beret. By the time I came to the end of fifth form it was worn and decrepit-looking, the prefect faded, louche item of clothing, worn with the belt cinched in as tight as possible.

So what did my mother do when I started sixth form? She bought me a new gabardine, in the latest A-line fashion, no belt, no hood! I was bereft but she had been and spent money on it so I had to wear it!

But we knew how to recycle stuff before the word recycling had been in common parlance. Then along came all the plastic stuff, really useful and now ubiquitous - clogging up the oceans, poisoning the wildlife!

So, good for the Spanish supermarkets, say I!

And now Tesco is jumping on the bandwagon here, launching a trial to remove a selection of plastic-wrapped fruit and vegetable to cut down on packaging waste. In two of its stores, Tesco plans to run month-long pilot from Today, removing plastic packaging from 45 foods where loose alternatives are available. The items include apples, onions, mushrooms, peppers, bananas and avocados.

It’s only two stores but I suppose you have to start somewhere. After all, big supermarkets are responsible for producing more than 800,000 tonnes of plastic packaging waste each year. That’s a lot of plastic.

Sarah Bradbury, director of quality at Tesco, said: “We hope this trial proves popular with customers. We’ll be keeping a close eye on the results, including any impact on food waste.”

We have to do something to protect our environment. 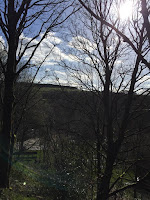 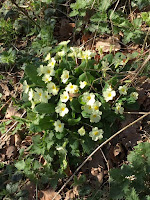 We’ve been out and about today enjoying the local environment. It’s been a beautiful day, positively springlike. 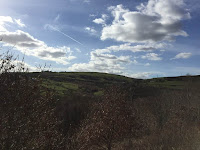 And now a friend has sent me this little item from the Daily Mirror:-

“Britain could see its hottest spring since records began with temperatures expected to soar well above average across the country through most of the season. The Met Office is predicting glorious weather for the three months until June starting with potentially record-breaking spring warmth this week. By Thursday most of the UK will experience temperatures in the high teens, and they could even hit 20C in places with prolonged periods of sunshine, say forecasters. Spring temperatures could hit 26C in April thanks to plumes of warm air from Africa, and the extended forecasts suggests summer could be hot and settled.”

Something odd is going on with our weather.

The same friend also sent me this bit of news: “Aldi is selling an inflatable budget hot tub just in time for summer”

I wonder if he is dropping hints of some kind.
Posted by Anthea at 09:37