Out and about early - well, quite early - before nine o’clock anyway - I noticed that the village centre is decked all about with Union Jack bunting. There are signs that the local pubs, as expected, are getting prepared for a little bit of a pub party, if not a full blown street party. In the co-op store a surprising number of people are buying fizzy wine of one kind or another. A surprising number, that is, for before nine o’clock on a Saturday morning! Maybe they just like fizzy wine. I can think of no reason why one should not drink sparkling wine on a fine summer’s late afternoon into evening. But that doesn’t quite explain why so many are buying it before nine o’clock in the morning. I don’t suppose it has anything to do with that national distraction-from-serious-stuff that is going on in Windsor.

Over breakfast Phil speculated as to why we have not been invited to the royal wedding. This was something of a surprise as he isn’t a great fan of weddings at the best of times. I think his remark was prompted by the fact that the royal wedding was all over the internet, like a bad case of acne or a measles rash. And then there was the fact that David and Victoria Beckham seem to have been invited and Phil was finding it hard to make a connection between the Beckhams and the Windsors. I suggested that if Harry were a chessplayer then maybe Phil would have been invited. But would he have gone? I seriously doubt it!

The media have been going mad about these nuptials for weeks. One paper last weekend fan a headline along the lines of “Megan is just like Diana”. Really! Diana was a naive 20 year old who had done nothing when she married Charles. Megan Markle is in the mid thirties, wealthy in her own right, an established actor and with a record of speaking out on a range of topics behind her. On a television news programme the other evening they were debating whether this mixed-race, feminist, independent young woman, confident in her own opinions could change the royal family and, more significantly, this country. There was a lot of huffing and puffing but in the end she probably won’t change things greatly. She may be a mixed race commoner but she hasn’t had the same life-experiences as the majority of mixed race commoners in this country, or in the USA for that matter.

In the end, it’s just another celebrity wedding. Lots of commentators say the happy couple are obviously “so much in love”. Well, I hope they are. And I hope they continue to be so. I hope they have a lovely day, although I suspect that a wedding that attracts such media-hype cannot be anything like as much fun as a perfectly ordinary wedding party.

But they have a lovely day for it. The sun seems to be shining all over the country. 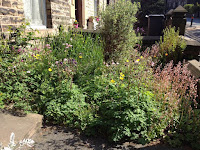 And in the meantime, my wild garden is coming on nicely. 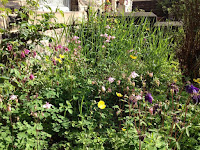 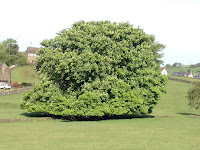 My favourite tree is blooming nicely, although the lambs that I normally see ‘neath the spreading chestnut tree seem to have been moved to another field. 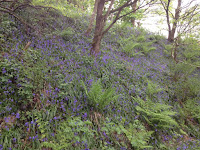 And the bluebells are putting on a splendid display along the bridle paths.

A day to go out and enjoy the sunshine - without a royal wedding anywhere in sight around here. 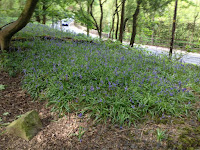