Well, the Conservatives have lost the two by-elections held yesterday. Mr Johnson seems unperturbed by the losses and says he will “keep going”, even though former Tory leader Michael Howard says he should resign and despite the resignation of Oliver Dowden, Tory party co-chair. We’ll see how things turn out. All in good time, I suppose!

However, judging by the poor turnout at Wakefield (I had emails from the Labour Party in the weeks leasing up to the by-election asking if I was willing to go canvassing there, presumably because their local people were unwilling to do so!!) I don’t think the result presages a Labour win if we had a full scale election now.

It was amusing though to watch a Liberal Democrat and a Tory being interviewed at Tiverton on TV last night as the boxes of votes came in to be counted. As the Tory spoke of all the good things his party has done for the country the Liberal Democrat lady’s face was a picture as she restrained herself from interrupting! Neither managed to answer the question about what their respective parties need to do to improve but merely spouted standard policy lines! 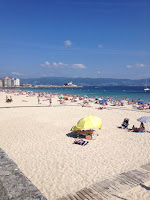 Meanwhile, it’s six years since the Brexit referendum. Six years ago I posted a photo of the beach at Sanxenxo in Galicia, with the caption ‘I am still in Europe!’. If only things were that simple. Priti Patel has been publicly celebrating six years since what she described as a great moment for democracy! One such post showed her doing that Johnson thing, taking part in an activity she would never do in real life, in her case pretending to drive big red bus, emblazoned with ‘taking back control” - are we not a little out of control? I have no intention of adding that photo to my blog. It seems that she and Johnson like to be seen doing stunts like that. Wasn’t there also a photo-shot of Rishi Sunak serving burgers? Maybe they all suffer from a sort of Marie Antoinette syndrome, playing at being ordinary workers!

There’s a bit of me that says that everyone, especially politicians, should spend a period of time earning their living doing one of those jobs that they’d never consider as a lifelong career. As a teenager I worked in a shoe-shop, experiencing the frustration of getting out five pairs of shoes for people to try on, only to have them walk out without purchasing anything, leaving the shoes for the shop assistants to tidy away. They were two sisters in their fifties working in the shop. It was all they had ever done! I was in the fortunate position of knowing that it was highly unlikely I would have to continue with that job for the rest of my life. Everyone should have that experience.