Reflecting on a bit of Sunday stuff.

And it goes on. Harry and Meghan are losing or giving up their HRH title. Or maybe they still have it but don’t get to use it all the time. Well, it seems to me that if you want to be normal, whatever that means, it’s probably as well not to go around insisting on some fancy letters before your name. And they plan to repay the £2.4m that went to refurbishing the home that they won’t live in most of the time but plan to keep as theirs. I never understood why the taxpayers paid for it in the first place. Most young couples don’t expect their employers to provide and pay for improvements on their accommodation!

In fact, most have great difficulty getting anywhere at a reasonable price anything like big enough for even two people to live in, let alone two and a baby and a parcel of staff and servants as well! In fact, again, I have been hearing about people who have bought or are renting flats and now find themselves being bankrupted by the cost of re-cladding their buildings or paying for a fire-watch service 24/7.

Here in the frozen north, as the weathermen predicted it has been very cold today. Frozen duckponds and heavy frost. It was very cold in the night as well. I woke in the small hours with frozen feet, so cold that I had to fill a hot water bottle to thaw them out before I could get back to sleep. The temperature was still at -1 degrees when I went out running just before 9.00 am so goodness knows what it went down to in the night.

It was, however, a beautiful day despite the chill. Here are some photos to prove it. I do like photos of reflections, as you might have guessed. 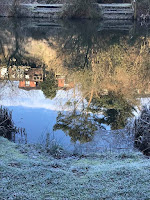 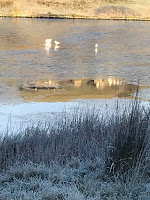 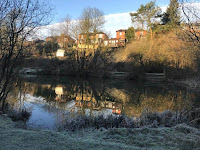