As we approach the day when we are supposed to celebrate our leaving Europe, the day when some people will have celebration parties and other will organise a mass protest singing of “Ode to Joy”, here are some thoughts on national identity.

I have a vague memory of a day in primary school when we all dressed up in the national costume of one country or another. I cannot for the life of me remember why we did this or whether this was completely international or just the countries of the United Kingdom. Whatever it was, for some reason, maybe because of my red hair, it was decided that I would be an Irish girl. This costume seemed to consist of a longish skirt, a shawl around my shoulders and a green headscarf knotted under mu chin. To the best of my knowledge, by the way, my family had no connection with Ireland and, besides, I really had a hankering to be a Welsh girl and wear a tall hat. No such luck!

I was reminded of this when I found this collection of photos in the Guardian. Children in a remote bit of Eastern Germany, where the traditional Sorbian festival Ptaci Kwas celebrates the approaching end of winter, are dressed up in a rather fine national costume. As in so many countries of Europe, there is this bit of Germany where they still speak their own language (presumably as well as German) and have their own traditional festivals.

I was long ago impressed by the Breton ladies, in Breton national costume, including fine, often very tall lace headdresses, sitting outside making lace - a good bit of marketing for their tourist industry. 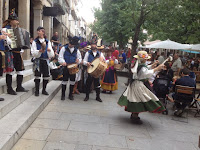 Most of the autonomous regions of Spain retain their traditional costumes and traditional dances (look in IOS photos in albums of Facebook). But we seem to have none. Even Morris dancing, such an English thing, is supposed to have originated in a Europe-wide enthusiasm for things exotic and Moorish back in the fifteenth century. So any idea that the strange costumes with bells and ribbons have anything to do with Olde Englande can be dismissed out of hand. 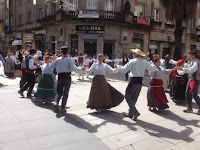 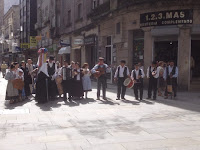 And our regional languages blended into standard English long since. The writer Melvin Bragg is supposed to have spoken only Cumbrian until he went to school but I wonder if he remembers it now and I also wonder wonder how many children grow up speaking Cumbrian these days. It may be that our quite early industrialisation forced movement from country to town and from district to district, wiping out regional differences in the process.

I even went and googled our national dress. This is what I rather depressingly found:-

“England does not have a national dress, but traditional dress can be found at English country fairs and within the regiments that make up the monarchy's royal guard.
There are seven regiments of the British army that guard the Queen and the Royal Palaces. Each one has a specific uniform that sets it apart from the others. The two regiments that make up the Household Cavalry are distinguished by the colors of their tunics, collars, and the plumes on their helmets. The Queen's Foot Guards wear full dress uniforms, which include a red tunic and bearskin hat, as they stand guard in front of Buckingham Palace and St. James Palace in London.
People often mistakenly assume that the traditional dress of England is the costume worn by the Queen's Body Guard, known as Beefeaters. Their scarlet and gold uniforms and distinctive black hats date back to 1552.
Scotland, Wales and Ireland all have national costumes. King Henry VIII commissioned an artist to create a template to create a national dress for England, but the artist did not deliver.”

Really we seem to be a mishmash of all the various peoples who have invaded or settled here. And on the whole I think it’s rather good that we are such mongrels.

On the other side of the Atlantic is another nation made up a similar mix of all sorts of nationalities of origin - the USA. I read today that a section of Donald Trump’s much talked about wall between his country and Mexico has been blown over in high winds. Is this a sign? Is it a message from On High that such a wall is not meant to exist?

Maybe it’s telling us all that we should be uniting and working together to solve world problems. Just a thought!
Posted by Anthea at 06:15