Yesterday evening we sat in one of our cafes-with-wifi listening to to some people shouting. The place was relatively empty. I might have said relatively quiet, were it not for the shouters. We had considered possible skyping a friend but the volume of noise generated by these two people made such an idea impossible. They were not drunk, or at any rate not obviously so. Nor were they having an argument. Indeed they seemed to be having a quite amicable, if rather long and very noisy, conversation. Maybe both were hard of hearing. Maybe both thought that being at opposite ends of the bar they needed to project to make themselves heard. Maybe they were just enthusiastic about the topic of conversation. Goodness knows what that was; their volume tended to distort the words! The same happens with opera after all.

These were both men of a good mature age, probably used to making themselves heard. We’ve come across the phenomenon before. In fact we crossed another one walking down the street this morning as we walked to the Castro: two people walking side by side, one speaking an a normal to e of voice, the other loud enough to be heard at the end of the street. The other morning I heard what seemed to be a commotion down on the street. Bear in mi d that we are in a seventh floor flat and that there are office below floor number one. When I looked out to see what was going on, I saw a chap on the other side of the road talking into his mobile phone. Clearly he was one of those who has not yet learnt that the distance your voice will travel in mobile technology, or indeed landline technology, is not dependent on how loudly you speak into the apparatus! It’s amazing how many intimate secrets you can learn from people who shout down their phones in public!

So, yes, this morning we walked to the Castro, one of the local beauty spots, one of Vigo’s “green lungs”. We were working on the basis that we should walk in the late morning before the temperature went up. Today the sun is shining, the sea and sky are brilliant blue and the temperature was 20 at 9.00am and 25 by 2.00pm! By which time we were making our way back from our expedition.

Walking towards the town centre and beyond we noticed a good deal of building and general improvement work going on. Vigo's Mayor Abel Caballero must be finding some money from somewhere. In particular we were intrigued by work going on around Urzáiz railway station in the town centre. It seems only five minutes since they finished building the new station and now there are cranes and other evidence of construction all around. We wondered whether the station was actually closed for repairs of some kind, an important consideration for when we next plan to go to Pontevedra by train. However, people seemed to be coming in and out of the main entrance with suitcases, so that was clearly not the case.

When we stopped for refrecshments at the Castro cafe we googled it and discovered that they have just had the go-ahead for construction of a new bus station + shopping centre, conneceted with and more or less on top of the railway station. This must have been the plan all along. Why else so much expanse of flat concrete surface above where the trains come in. A more central bus station for the city makes sense and, of course, nowadays it is de rigueur for train and bus stations to be shopping malls as well. Euston Station in London and Piccadilly in Manchester are prime examples. I have not travelled to Madrid for well over ten years now and so I cannot comment on Atocha station. No doubt someone will bring me up to speed. 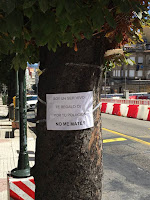 Work was also going on along Gran Vía with the lower end of it reduced to one section open for traffic. I have no idea what is going on there but some people clearly think the mature trees along way are under threat. They all have notices pleading, “Please don’t cut me down! I provide oxygen and improve your air quality!” 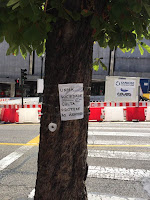