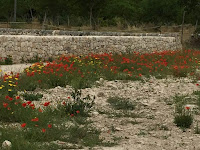 When we were in Sicily at the end of May we were struck, indeed seriously impressed, by the wild flowers along the roadsides. Mostly bright red poppies but there were other species among them, and of course everything looked extra glorious in the bright sunlight. I have few photos of them and almost none of the best as they were mostly seen from the minibus. 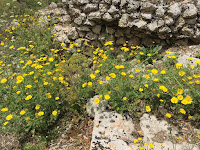 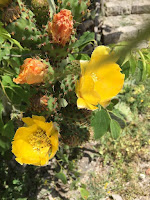 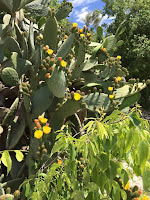 And there were, of course, the more exotic plants like the prickly pear in flower, 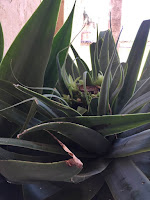 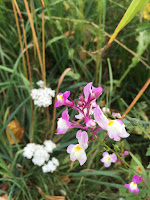 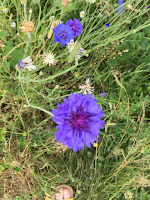 Last weekend, in the park in Chesham with my second smallest granddaughter we admired the wildflower beds, seemingly placed at random in the expanse of grass. 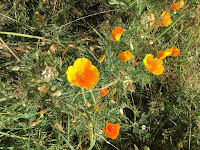 Down the road from our house, on the way to Dobcross, someone has scattered wildflower seeds in the grass verge, recreating the kind of beauty I saw in Sicily.

And today I have read about places all over the country where local groups, and sometimes local councils, have been seeding wildflowers in the roadside verges. One group complained that their local,council came along and mowed down all the flowers on a regular basis, on the grounds that they were a driving hazard. Are drivers so distracted by the bits of beauty at the roundabouts?

For more pictures of roadsides and roundabouts bedecked with wildflowers, go to this link. If everyone planted some wildflowers maybe the bees would be more numerous, the air a little fresher and everyone calmed and cheered by the sight of some colour on their drive home. If only ...

“A historian has discovered a royal decree issued to Donald Trump’s grandfather ordering him to leave Germany and never come back. Friedrich Trump, a German, was issued with the document in February 1905, and ordered to leave the kingdom of Bavaria within eight weeks as punishment for having failed to do mandatory military service and failing to give authorities notice of his departure to the US when he first emigrated in 1885.”

“Returning on a visit to Kallstadt in 1901, Trump fell in love with Elisabeth Christ, whom he married a year later, returning with her to the US. But when she became homesick and wanted to return to Germany, the authorities blocked his attempts to settle there.
In an effort to overturn the royal decree dated 27 February 1905, Trump wrote an obsequious letter appealing to Prince Regent Luitpold, addressing him as “the much-loved, noble, wise and righteous sovereign and sublime ruler”.
But the prince rejected the appeal and the Trumps left Germany for New York with their daughter on the Hapag steamship Pennsylvania on 1 July 1905. Elisabeth was three months pregnant with Donald Trump’s father, Fred.”

And so Friedrich Trump’s grandson ended up in a position in 2019 where he could encourage his supporters at a rally to chant “send her back”, referring to one of the “Squad”, the four congresswomen so disliked by POTUS.

We live in strange times: the politics of tweets, mob chants, semi-legitimised racism and of course the politics of apologies, where the very slightest criticism can be analysed into an insult. Life is a lot simpler if you just concentrate on the bits of beauty.

Unfortunately, while we do that others are busily tweeting nastiness!
Posted by Anthea at 08:38