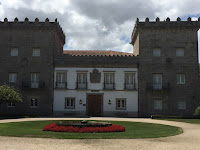 Today having been fine and sunny but not too hot, we decided to carry out a plan we have been thinking about. Every once in a while we like to catch a bus to Plaza de América, not quite the other end of town but almost, and go for a stroll around Castrelos park, one of the nicest green areas in the city. It contains the Pazo de Quiñones de León, an old stately home with the kind of gardens that might have figured in the film The Garden of the Finzi Contini: a box-hedge maze, rose-garlanded walkways, an old tennis court, a bit of a lake and loads of trees all around. 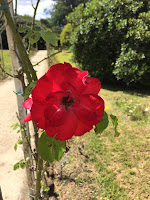 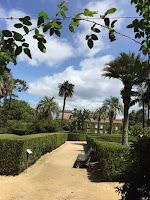 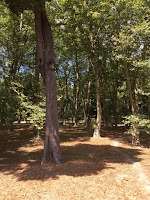 Serendipitously, the bus we thought we had missed was five minutes late so we pretty well stepped out of the flats, crossed the road and stepped onto it. After alighting at Plaza de América some time later, we strolled down the Avenida de Castrelos, reminiscing about other walks that way. There was the occasion when we stopped in a bar on our way back for a refreshment and found ourselves watching a stage of the Tour de France where Alberto Contador was losing ground to a young Englishman called Froome, and incidentally losing the support of a drunken Spaniard in the bar who grudgingly admitted that “ese inglés” knew how to ride a bike. Another time we were with a couple of friends who were growing weary and in need of refreshment on a stretch of the road where there was an amazing dearth of bars or cafes. Eventually we saw a sign for an Asociaciön de Vecinos, a kind of community centre, where they took pity on us and sold us beers even though we were not members. There are some nice people around!

Once in the park, we made our way up to the Pazo, entering the gardens through a side door which is usually closed, probably because it involved crossing the moat - yes the moat - on a precarious construction of broad iron girders.

And we strolled around, admiring the old and new statues in the gardens 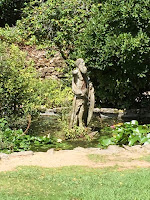 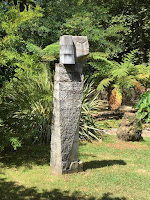 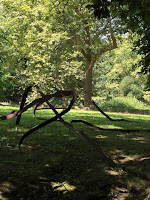 and the odd pieces of modern art made of twisted, rusty iron - not really an asset. And then a groundsman told us that the gardens were closing at two o’ clock. It was already a quarter to two. He was doing a circuit letting people know, he told us, so that nobody would be locked in. 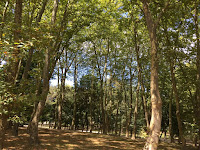 And so our visit was shorter than intended and we went on our way. The second bit of the plan was to exit by the other side of the park, away from the avenue, and follow the river Lagares as far as Avenida de Madrid.

It’s a pleasant walk, mostly under trees, and only disturbed by occasional runners or cyclists, the latter particularly annoying as they tend to creep up behind you on their silent tyres and without a good bell. I find this is a universal problem, well, in both Spain and the UK. My bike has a good, old fashioned bell which gives a fine, resounding “ting-a-ling” but most people seem to ride bikes with bells that give a feeble “ping” which can hardly be heard at all. 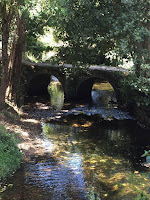 Along the way we came across a new sign indicating that the old stone bridge we could see, but not actually use, dated back to the 12th century and was believed to have been built on the foundations if an old Roman bridge. There you go! Just opposite someone had produced a rather excellent bit of graffiti art work showing the bridge in its glory. I quite often admire graffiti, although some is lacking in imagination and talent, but I decided this one was pretty exceptional! 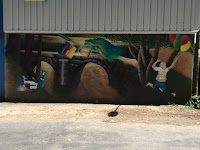 Reaching the end of the river walk, we were back on the highways and by-ways of Vigo and decided it was time to stop for a little refreshment before tackling the last few Vigo hills back to the flat. For the grand total of €2.40, we had a mineral water each, accompanied by two little slices of empanada, two mini slices of pizza, two small salad sandwiches and a small bowl of crisps. Now, you would be lucky to get one mineral water for that in the bar next door to our house in Saddleworth.

What I want to know is how the bars here even begin to make a profit if they give away such a lot of snacks!

Spain is different, or at any rate Galicia certainly is!
Posted by Anthea at 12:41