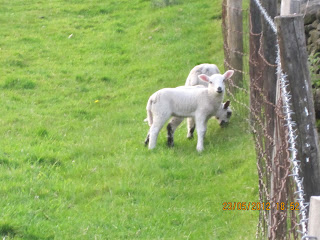 On Sunday we left behind the little lambs in the fields of Delph (the Saddleworth village where we live) and the preparations for the upcoming Whit Friday celebrations. The latter include the setting up of the “Delph Donkey Trail” where local shopkeepers and pub landlords put strange model donkeys in their shop windows or car parks and people go round ticking them off on a list. I suppose it’s a kind of trendy modern version of the I-Spy books of my childhood. 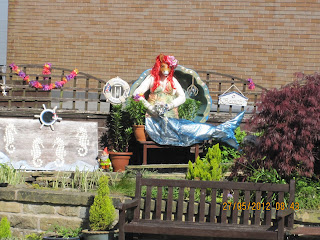 Anyway we set off, having a lift to Liverpool airport with our daughter who very nearly got us lost by going on autopilot and following her normal route to university. This is what happens when you get into indignant conversation about stuff while driving. En route we passed a splendid example of English (il)literacy advertising a strange food called “homeade soup”. Lemonade is made from lemons so maybe this soup is made from homes.

Eventually we made it to Liverpool and only set off half an hour late as a result of a baggage handling fiasco. Just as we were about to take off they discovered we had an extra bag in the hold and we had to go back and get sorted out. So Ryanair were deprived of the chance to trumpet another flight arriving on time at Oporto.

Apart from that our flight was uneventful, despite the permanently whingeing child sitting behind us. Mind you, having heard the mother screeching in Portuguese about problems with her seat and her hand luggage I’m not surprised that the child was bad-tempered.

We knew that we would arrive in Oporto too late to travel on to Vigo at once so we had tried unsuccessfully to book into our usual Oporto hotel, the Residencial Vera Cruz. They had passed us on to one of their “sister hotels”, the Pão de Azucar, just round the corner. When we got there, however, they denied all knowledge of this and discovered that in fact we were booked into yet another “sister”, the Hotel Aliados, just round another corner. Such fun!

In the middle of all this my Phil thought he was in danger of losing the money belt he had fastened round his middle. He had loosened it during the flight and realised as we tried to book into the Pão de Azucar that it was sliding down the inside of his trouser leg. By the time we reached the Hotel Aliados, it was reaching his knee. I don’t think there was any real danger of his losing our Euros but he was a little concerned, not to say embarrassed. A lesson in being more careful with your money was learnt I think.

Finally we were booked in, installed and ready to play hunt the late-evening beer. After our last experience of late-Sunday-evening opening (or lack of the same) in Oporto, we checked with the receptionist in the hotel before venturing forth. Luckily the hotel had some kind of deal with the Guarany, a cafe-restaurant on the corner, and we successfully acquired a nice cold beer and a “tosta”, a sort of ham and cheese toastie for Phil. 8 euros worth of refreshments: not bad at all. 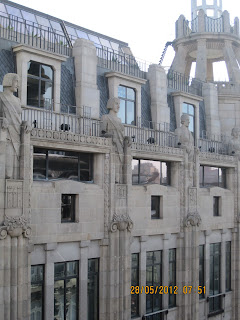 Monday morning dawned fine and sunny but surprisingly far less hot than Manchester has been for the last week. I looked out of the window to see this fine example of the splendours of the tops of buildings. And so we breakfasted and rushed off to catch the bus to Vigo, arriving just too late to catch the estate agents’ office open. But were we downhearted? Not one bit for across the way was the Casa Puentes where we had a good basic menu del día for €7.90 each.

Not only that but it also has wifi so we have chosen it as our wifi cafe for the time being. It almost made up for having spend the rest of the afternoon buying stuff from the local Chinese bazaar, stuff like pots and pans that our so-called furnished and equipped flat did not have.


Still, all part of life’s rich pattern. With luck the sun will keep shining on us.
Posted by Anthea at 07:20