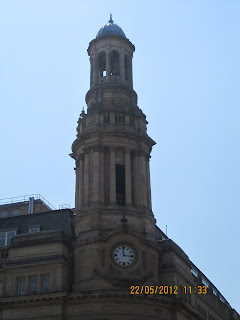 Forget about the queen’s Jubilee celebrations and the fast approaching Olympic Games, what the country has been going mad for this week is sunshine. As we finalise our preparations to escape to Spain for the summer, the skies over Manchester turn blue and the temperatures soar.

As a result everywhere I’ve gone this week I have been treated to the delights of the male of the British species showing off his upper torso to the world, regardless of whether said upper torso is toned or flabby, regardless of whether anyone really wants to see it. Sitting outside pubs, and not just country pubs but also central Manchester pubs, walking down the street, standing chatting on the corner, men have got their tops off and it’s not always a pretty sight.

Shorts and t-shirts, vest tops, short sleeved shirts, I’m all in favour of those in the sunshine but why does the British male think he has to bare his chest to the world just because there is a bit of sunshine. Sunbathing should be confined to the beach or the garden. I’ll even stretch a point and say, OK, in the park as well if they’re stretched out on the grass. But, please, not on the street. Even though strappy tops may abound, I’ve yet to see the women deciding to parade around in their bikini tops on the high street.

I may, of course, be mistaken but I don’t remember seeing this kind of male striptease as a normal way of dressing on the terrazas of Spanish bars and cafés. At a beach bar maybe but not in the town centre. When I arrive in Spain, I shall check up on the situation.

The Jubilee and the Olympic games are making their presence felt here in the general madness. You can’t move around here for red, white and blue stuff. Every shop is decorated with flags and pictures of royal personages. They are all stuffed to the very top with books, mugs, notebooks, pens, t-shirts, dresses and other items of clothing, all decorated with the union jack and pictures of Her Majesty. And then we almost had an international scandal when Queen Sofía of Spain withdrew her acceptance of the invitation to Queen Elizabeth of the UK’s Jubilee dinner. This was apparently sour grapes over Gibraltar. One of the princes had been sent to Gib to help them celebrate the Jubilee and someone said that under the circumstances Sofía really shouldn’t go to England. Very silly, if you ask me.

And then there are those games. Policemen on duty at the events have been instructed to show the “happy face of policing”. I wonder if someone is going to play “The Laughing Policeman” on a repeating loop to make sure they smile. An old lady in Norfolk has been told she mustn’t sell at her church fare a doll for which she has knitted an outfit featuring “GB 2012” and the Olympic ring logo. She might be breaching copyright!! Now I know that the world has gone crazy.

If I needed further proof, I only need to look towards Cannes where various film stars such as Mr Brad Pitt are charging for interviews at the film festival. For 20 minutes of good old Brad’s time journalists must pay £2000. James Gandolfini and Nicole Kidman are marginally cheaper at £1200 for 20 minutes. Do these people and their film companies not earn enough money? Don’t they appreciate the publicity they get when an interview is featured in a newspaper or magazine?

It’s definitely time I got away from it all.

If anyone else fancies escaping a friend of mine has a two-bedroom flat to let close to the sea in Baiona, not far from Vigo. If you are interested, let me know.
Posted by Anthea at 14:21