I would like to introduce you to some of the characters of the streets of Vigo's busy centre. 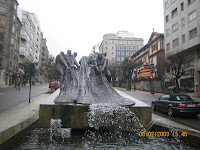 At the bottom of Gran Via you will see another huge statue to balance the crazy horses at the top. This time it is a group of fishermen, hauling in an enormous net, provoking a chorus of "Yo, heave ho!" from certain British jokers each time they go past. 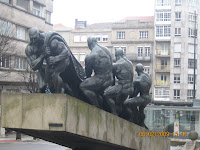 More seriously, of course, it is a tribute to the many gallegos who have earned, and who still earn, their living from the sea.

Turning left from the bottom of Gran Via, you move onto Urzaiz, one of the main shopping streets of the centre and then onto Principe, what you might call The Main Drag, a broad pedestrianised street where people stroll around and where the street musicians compete with the piped radio music.

First there is the violinist who plays on the street itself when the weather is fine and warm or in a doorway when it is cold or damp. Mostly he plays bits of Carmen, quite badly but recognisably and with a ready smile. Occasionally he switches to Lara's theme from Doctor Zhivago. Terminally cheerful, he greets passers-by and wished us all "Felices fiestas" as Christmas approached. Not tall, quite skinny, dressed in a rather long, worn brown leather overcoat and since the weather turned colder he has been sporting a woolly hat.

To accompany, or possibly to compete with, the violinist there are a few accordeon players, usually spread out along Principe but sometimes teaming up to play together. They are younger than the violin player and may be something South American from their appearance. They play lots of schmaltzy waltzes and you may find your feet quickening to the sound of Piaf's "Padam, padam, padam". Having seen an old couple quietly waltzing as the accordeons played one day, I almost imagined a scene from a film where all the shoppers and strollers drop their bags, choose their partners and begin to dance down the street.

For a while there was a very professional trio, from some Northern European country according to their notice, playing classical music very seriously and well. A woman and two men, very formally dressed, they had a collection of CDs on sale. However, Vigo must not have been an appreciative enough audience as they did not last very long on the streets. 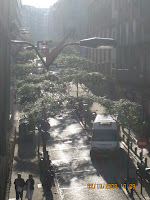 Marching up and down Urzaiz and Principe, and occasionally seen on our own street, is the cigarette seller with his cry of "A do-o--o-o-o-o-o-o-os el paquete de Winston!". I have never seen anyone stop and buy cigarettes from him but he is almost always around.

And then, of course, there are the umbrella sellers. Galicia is rightly known as "green Spain" and the locals will tell you that it rains a lot here. We have arguments about whether it rains more here or in Manchester! Be that as it may, when the rain clouds gather so do the umbrella sellers. They appear as if from nowhere, usually the same Africans who sell fake designer handbags and sunglasses, with stacks of umbrellas to sell. And gallegos leave their umbrellas everywhere. They pop into a cafe to avoid the worst of the downpour and leave their wet umbrellas in the inevitable brolly stand in the doorway when the rain stops. So there is always a ready supply of customers for the street brolly sellers.