Taking a look at Vigo

Before I start to rant and rave about numbers, Spanish customs and so on again, I thought I'd take a little look around Vigo. 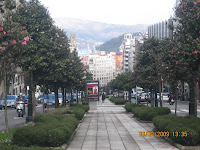 One of its main thoroughfares is Gran Via, a huge dual carriageway going through a large chunk of the city but with a walkway up the middle with trees and flower beds. Even in February, there is colour in the flower beds and blossom in the trees. Some of it may be shaken off by the wind at night but enough remains to brighten up the day. 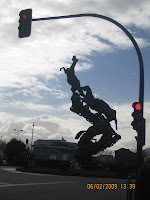 Way up at the top of Gran Via is one of the strangest equestrian statues
I've ever seen.

About half a dozen horses race up a spiral staircase, leaping up against the sky. 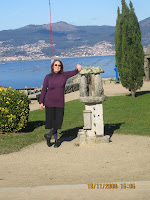 If you head to the right at the top of Gran Via, you will come eventually to the Castro park. As its name suggests, it is the site of an old fortification.

This is the high point of the city. I am told that there was snow there over Christmas but, if so, it did not wait for us to come back and see it. We have mainly seen the Castro park in the sunshine. We first saw it one boiling hot day in August 2007, climbing to the top and thinking that we might die of heat exhaustion and dehydration. Now we trot up without a care.


From there you get a tremendous view across the bay to Cangas and Moana, which are both accessible by ferry from the port. 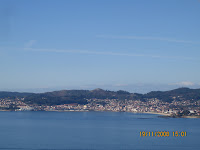 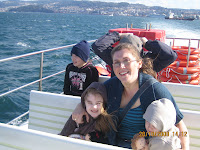 When the family came to stay in October, that's just what we did. Our Tasmin overcame her fear of boats and became a brave sailor. The little ones ate piles of chips and in general we had a good day out. 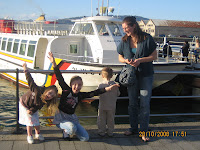 The fact that poor Phil ate some dodgy cockles is neither here nor there and must be a story for another day!