It’s getting to the time of year when you can contemplate a digestive stroll after the evening meal. Everywhere is beginning to look a bit more green. The taller trees are still very bare but confusingly some hawthorn hedges are already beginning to blossom - we’ll be casting clouts before we know it.

Late yesterday afternoon we strolled out (before not after eating) and decided to investigate the local “Forest Path”. When we first moved to this house some 30+ years ago, my son and I went exploring and discovered a path leading off from one of the main roads to Dobcross. It went down through the trees in the valley below Dobcross and came out at the bottom of Dobcross hill. We dubbed it “the secret path”. In recent years it has been gentrified, with a proper sand and gravel path, organised steps in steep places and informative notices about the trees and plants and wildlife. And it is now officially a Forest Path, even if the forest is not very extensive. 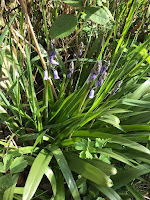 We wanted to check how damp and muddy it was at the moment as during the rainy winter parts of it became impassable. Our verdict: pretty good! In a couple of weeks we expect it to be full of bluebells. As yet all you can see are bluebell leaves, whereas in my garden our small corner of bluebells is coming on quite nicely!

A patch of land between the road up to Dobcross from our road and the Forest Path area came up for sale,some time last year. We’ve been watching with interest what the new owner might do with his land. So far it has been mostly putting up barbed wire fences, including very close to the path through the valley. Yesterday we were a little concerned to find a section the path with fencing now on both sides. A previously open section of grassland appears to be fenced off! What nefarious plans are afoot? I wonder!

It’s just as well we walked the Forest Path when we did as late last night it started to rain heavily. Maybe the mud will return. However, this morning it was fine and dry when I went for a run - cloudier and cooler but still fine and the path past the millponds was still passable. Obviously we need some rain but I prefer not to have too much of it. We’ll see how that goes.

Since Phil tested positive for Covid the other day we have not been seeing anyone, other than those we pass on walks. His Covid seems to be of the reasonably bad cold variety. In contrast, his younger brother who also tested positive, probably as a result of travelling round here and there to places like Poland to go to Marillion concerts, has been knocked flat by it and after a week is only just feeling like getting up and doing things. Maybe travelling on planes and singing along to favourite songs with crowds of people exposed him to a bigger dose!

Anyway, as a result of all this the family is split into separate little units again - just like lockdown!

Our royal family, on the other hand, seems to have been trying a bit of getting back together. Harry and Meghan are reported to have visited Her Majesty at Windsor Castle on their way to the Invictus Games in Holland. They also met with Prince Charles but they didn’t bring the children. That will happen in the summer, it seems. Apparently they still don’t feel entirely safe here as they no longer get royal family security coverage. I would have thought someone who can afford to wear a coat that cost £3080 (headline from an article I didn’t read in the Daily Mail) could afford to pay for effective security.

The headline for the article said she gave the coat to a woman to keep her newborn baby warm. Having written that last sentence I had to go and have a look. They were walking about before the Invictus Games opening ceremony when the temperature dropped. One of the Invictus team had her new baby with her. Meghan, bless her sentimental heart say royalists, gave her the coat to keep the baby warm. Presumably she got it back again afterwards.

One royal fan said: "I was wondering why the woman next to Meghan was holding the coat so awkwardly. I couldn’t see the tiny baby wrapped in the coat. Meghan is such a sweetheart."

Another said: "I didn't even see the baby. I thought she was just carrying Meghan's coat. Just goes to show how thoughtful Meghan can be in the moment."

A third added: "This is what authenticity looks like. Women supporting women in the moment."

The article pointed out, as such articles do, that the Duchess of Sussex as well as loaning out the Max Mara coat (I discovered the brand name!) was also wearing a £3,200 Valentino white trouser suit, with white shoes and handbag - brand and value not given!

Wow! She was walking around doing good works wearing more than £6,000 worth of clothes! Goodness! And there are people who can’t afford to pay their gas and electric bills and need to go to food banks so that they can feed their children. This is a different way of living!

So they have stopped “working” as royal family members and now do rich people stuff, swanning around the world, leaving the children, I presume, in the care of a nanny. I have often wondered how Meghan, and Kate for that matter, feel about this. It’s a different kind of motherhood.