Life goes on. Rain! Frogs! And fighting the gloom! 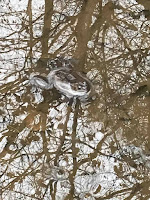 Today it rained on me when I was out and about first thing. This will no doubt be useful for the frogs in the muddy water alongside the local bridle path. The presence of frogs has nothing to do with the current situation, unlike the wild boar in Spanish cities and the mountain goats in Welsh towns. The frogs turn up there every spring. I read somewhere that they always go back to the place where they spawned. If that is so, then the ones we had in an old sink in the back garden in my childhood must have been very disappointed when they returned to find that the sink had been removed by my father. My mother had protested furiously about all the tiny black frogs which climbed out of the old sink and scrambled all over the garden. It was a pretty good nature study experiment though, maybe one to be copied by home-schoolers now. 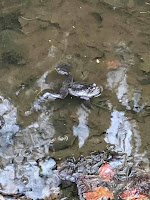 I always wonder where frogs go after they have mated. The muddy stream I mentioned above is full of frogspawn but you can bet your life that by the end of next week there will not be a frog to be seen. So where do they go? And where do the hatched froglings go to? I keep a lookout for a procession of them on their way somewhere, a kind of froggy pilgrimage along the Donkey Line bridle path. So far, though, I have never seen anything. We once had to drive though a road full of frogs in Lochgilphead, Scotland. We waited and waited for them to disappear but it clearly wasn’t happening and so we had to drive on. Quite traumatic!

The rain, if it continues, will probably curtail some people’s daily exercise routine, especially those who dance in the street, maintaining social distancing of course, like the residents of the street mentioned in this article.

As Spain continues to have huge numbers of coronavirus deaths, 950 yesterday and a running total of over 10,000, there emerged the story of one Spaniard, Rafael Gómez Nieto, a 99 year old who has just died in Strasbourg from the virus. It turns out he was the last surviving member of a company of predominantly Spanish troops who helped liberate Paris from Nazi occupation in World War II. Here is a link to an article about these Spanish Republicans. I doubt that many people knew much about them. After all, it was unlikely that Franco would want the facts publicised in his time.

And here’s another feel-good story, just to prove it’s not all doom and gloom. Even without the virus crisis this would be a pretty good success story: African migrants in Italy managing to set themselves up in a food production business, even if only a small way. Now they are helping to keep Rome supplied with vegetables.

Over one other side of the ocean, however, prejudice still gets in the way of cooperation. Take a look at this story:

Oh, boy! You really could not make it up!

Meanwhile, life goes on. We grow accustomed to contacting friends and family through video chats and phone calls but it’s not really the same.

On the menu today is some more home-made vegetable soup, left over “Is that all there is?” rice and prawns, a bit of salad, and possibly rhubarb and apple pie.

And to finish off, here, I hope, is a link to a pair of twins playing violin to cheer the world up.

Clearly we all need a twin and a violin.
Posted by Anthea at 05:31