Some stuff about spiders.

Apparently it is the spider mating season. At least that is the only explanation I have ever been given for the fact that we see more spiders indoors at this time of year than any other. Someone told me that they come indoors looking for somewhere clean and dry to mate. Oddly enough we never see them in our flat in Vigo, not even at this time of year. Is the seventh floor too high for spiders?

My plan is to pop a glass over her, slide a card under the glass and then walk to the bottom of the garden to release her into the wild. This is a tried and tested spider-catching method. My father instilled into us as children the rule that spiders are not to be killed as they are useful creatures. Fine so long as they are not stalking across my bedroom ceiling when I want to go to sleep and cannot do so for fear that the useful creature will descend on a web and crawl all over my face!

The current spider is being elusive however. I first spotted her in the kitchen, high up in an inaccessible corner. Well, it was inaccessible without getting out the stepladders and even then it was not a position where I could easily have popped a glass over her. The next time I saw her I was sitting on the rowing-machine at the back of the kitchen-dining-room, fighting the flab. There, in a little nook next to a bookshelf was the spider, once more rather inaccessible. By the time I had grabbed the dustpan and brush with the idea of sweeping her out, she had disappeared. The last time I saw her she was strolling across the rug in the living room as we watched television. I pointed her out to Phil and the spider must have sensed what was going on for she put on a burst of speed, climbed up the edge of the fireplace and scuttled underneath the electric fire. We have not seen her since but I am on the lookout! 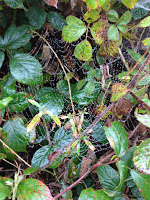 Out running the other morning I took this photo of a spiderweb. Strung out with raindrops I thought it looked rather fine. A spiderweb where it should be - outside in amongst the bushes and brambles.

Then this morning I read about Aitoliko in Greece, where the beach and the vegetation alongside the roads leading to the beach have been covered with huge spider webs. Again, this is because of the mating season.

“However, the spiders of Aitoliko, which is 300km from Athens, don’t pose a threat. “These spiders are not dangerous for humans, and will not cause any damage,” molecular biologist Maria Chatzaki told Greek news websites.

She explained that the seasonal phenomena occurs when the spiders are mating, and that an increase in the mosquito population this year had lead to perfect conditions for a population explosion among the spiders.

“The spiders are taking advantage of these conditions, and are having a kind of a party. They mate, they reproduce and provide a whole new generation.”

She noted that the phenomena had been seen before in the region in 2003, and that the spiders would soon die off, and the web would degrade naturally, leaving the vegetation undamaged.”

So that’s okay then.

As we are going to Greece in a few weeks, I trust the spiders’ mating season will be coming to an end and the place we visit will not be similarly infested. But maybe Phil, who is loved by mosquitos and reacts badly to them, should take his antihistamines before we set off.

Last word: I was pleased to find that my studies of Greek enabled me to read the caption in Greek on the you-tube clip in the news report!
Posted by Anthea at 05:55