Last night we went to the annual special dinner organised for the chess tournament. Those chessplayers and accompanying family members who are staying in the hotel are invited every year. It's usually very fine. Last night was no exception.

We began with copious helpings of very nice "croquetas" together with pan a la catalana (ie bread rubbed with garlic and tomato) with rather fine serrano ham on top. After this came little empanadas, looking for all the world like tiny Cornish pasties. And then we were served so many plates of octopus (very nice, tender octopus too) that jokes were being made about how it could be recycled for today's lunch: a kind of sopa de pulpo for starters, an empanada de pulpo for the main course and a mus de pulpo (octopus mousse along the lines of chocolate mousse) for dessert.

Some guests were disappointed that there were no percebes (goose barnacles), a seriously over-rated and over-priced regional shellfish delicacy in my opinion. Much discussion ensued. According to one couple, it is still too early in the season. Another denied this, telling a tale of a goose barnacle caught/prized off a rock recently as big as a fist. Sceptics thought this might not taste as good as usual but were assured that it was tender and flavoursome.

Comments flew around about everyone's favourite shellfish. The local nécoras - razor clams - came in for much praise. I tried to think of how a similar conversation might go in England. Apart from black pudding in some parts of the north of England, it was rather hard to think what food items people would get quite so regionally patriotic about. Maybe certain kinds of cakes.

We were all of us trying to resist the temptation to eat too much in these early stages of the meal. We were saving ourselves for the main course: arroz con bogavante - a tasty rice dish with lobster. Some people regard it as paella but it is not really the same. It was delicious, as usual, although I am always left wondering whether dishes that involve cracking open the claws and bony shells of sea creatures to obtain a fairly small amount of meat are really, truly worth the effort involved. No doubt Galician friends would regard this as a kind of heresy.

Here comes another bit of heresy. At the end of the meal, during which we had all downed a fair amount of excellent Albariño wine, we were invited to go down into the deepest depths of the building for a "queimada". This is a drinking ritual where large quantities of orujo, Galician firewater, are mixed with sugar and chopped fruit and set alight. As it burns, the mixture is stirred, large ladlefuls are raised up, spouting blue and yellow flames, and then dropped back into the cauldron, by whoever is brave enough, daft enough, fireproof enough or paid enough to do so. In this case it was one of the waiters. 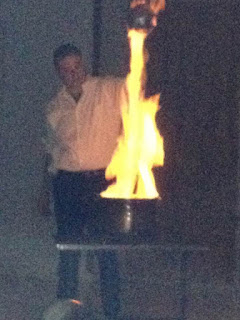 While this went on a recording told us all about it in respectful tones.

Whenever I have seen this done before it has involved people dressed up as witches and magicians, some walking around on stilts or doing wild dervish-like dances, and a general atmosphere of ritual magic. We had none of that this time but there was inevitably some gaita - Galician bagpipes - music.

Eventually the flames died down and we were all served a little glass of hot, fruity firewater.

All well and good but personally I would have preferred a little chupito of licor de café.
Posted by Anthea at 08:20