Travelling from Portugal to Spain yesterday evening, I noticed that we passed quite a few of those tiny little Smart cars. They look very nippy but yet I am not sure I would want to drive one on a motorway. Mind you, motorways around here are a good deal less busy than the M60 around Greater Manchester.

You get quite a good view into the driver's seat of a little car from an AUTNA bus and so I was able to observe at least five of the Smart car drivers busy with their phones while driving. One was in a conversation, phone to his ear, three seemed to be consulting satnav on their phone screens and one was busy texting, no hands on the wheel. I suppose that conceivably hers was a driverless car and she was just sitting in the driver's seat but not actually driving. However, I think that is very unlikely. So not only was she driving something that resembles a sardine can on an admittedly not very busy motorway but also she was not really controlling the thing in a very conscious manner. The madness / carelessness / death wish of some people amazes me. 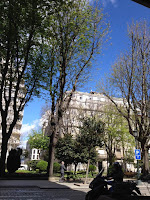 We woke this morning to rain but by 9:30 it had gone and we had blue sky and sunshine. Long may it last!

Our street is very noisy. They seem to be laying cables or doing something to the gas supply and possibly relaying the pavement, renewing parking bays and separating them with little islands where no doubt they will plant flowers and bushes. It has to be said that they are very good at that sort of thing here in Vigo. The other end of our street was beautified last year but our section remained scruffy and just a little dangerous - with minor potholes that you could turn your ankle in, not with hoodlums who might jump out and attack you, I hasten to add.

This is Vigo, after all, not Barcelona. Our gypsies tend to beg rather than attack. This does not mean that they don't steal but I have no evidence either way.

The bad reputation of the gypsies follows them around. My daughter was telling me about the latest scam by probably Romanian gypsy families (and, yes, I am aware that we are stereotyping here and that there are far more perfectly fine, upstanding, honest Romanians in the Uk than there are gypsies or those selling the Big Issue) in Oldham and Ashton. This is what happens: a woman rushes up to a shopper with a baby in her arms, screaming that her baby is really ill and she needs to know what to do and how to get to a hospital or at least a first aid post. The shopper puts down her bags in a natural movement to be able to help and comfort the agitated mother. While she is talking to the agitated mother, the agitated mother's companions walk past and pick up the bags and make off down the street.

I've heard of similar groups outside railway stations in Madrid or Rome, offering to help tourists, showing them maps and giving them directions, with a lot of touchy-feely patting of shoulders and the like. Meanwhile one of the gang is busy picking pockets, rifling rucksacks and relieving the hapless tourist of valuable stuff. Isn't the world a splendid place! Fortunately we see little of this around here in Vigo. Our experience has been very positive on the whole. People are on the whole friendly and genuinely helpful. So long as all we have to worry about are kamikaze Smart car drivers, then all will be well. Especially as I am not driving while we ate here. 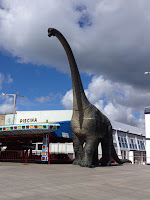 Out and about later:

There is a dinosaur down by the port.

And here are some of the disturbing cartoons from yesterday in Porto. 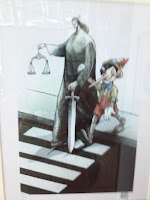 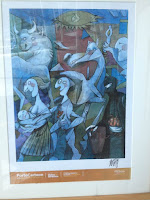