Getting your own back.

We set off for a walk this afternoon and went past numerous bars where football fans were anxiously watching Spain play Switzerland. Not even very anxiously really. After all, who has heard much about Switzerland and great football? The selección española has, after all, already won the European Championship. There were Spanish flags all over the place, women fans wearing headscarves in the Spanish colours and tiny boys with their dads in matching Spain tee-shirts. One bar even had its huge TV perched on the wall of the terraza in the shade so that everyone could watch the match outdoors.

Our walk took us on a roundabout route to the chess club and we called in at the Café Monaco on the corner five minutes before the end of the match. Spain was losing 0-1. Despite various corners and valiant attempts to even up the score, they never managed to catch up. Two fans in the café almost burst into tears on the spot. Nobody wanted to stay for the analisis pos-partido.

On our way home later we saw many a long face and very few smiles. Groups of disconsolate fans sat on benches, their red and yellow flags trailing on the ground. How are the mighty fallen! Well, I suppose it makes up for those people who laughed at England only managing to draw against the USA!

On a brighter note for Spain, it seems that there might be justice after all. At t 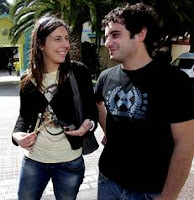 She went to the police station and pleaded for the return of her « dangerous weapon », but to no avail. Even her grandmother declaring, «Se teu avó soubese isto...» (If your granddad knew about this …) made no difference. But then her boyfriend, who was driving the car at the time of the confiscation, had a phone call saying they could go and collect it.

Power of the press? Maybe! It rather looks as though the article in La Voz de Galicia made a difference to people in uniform getting too big for their boots. The policeman who returned the offending tirachinas apologised, waived the fine, said that he could not understand how it had happened and suggested that maybe it had all been a joke.

All’s well that ends well, at least as far as the lady driver is concerned. I wonder if the same will happen to la selección!
Posted by Anthea at 13:02