Galicia has its Day!

Well, I got up this morning and strolled down the road as usual to buy bread for breakfast. The street was strangely quiet. The shops were mostly shut. What was going on? Had I inadvertently slept the clock round and was it, in fact, Sunday and not Saturday at all?

Then I remembered: 25th July, Santiago = Saint James, his feast day and Día de Galicia. It was only natural that everything stopped. Thank goodness I had shopped yesterday. And, even more so, thank goodness the bread shop stays open on Sundays, feast days, Easter and probably Christmas as well. I have only known it to shut on May 1st, fiesta del trabajo!

Yesterday’s paper wished everyone a Happy 25th of July with a poem in gallego AND castellano:


It’s nice to see everyone included in the celebrations.

Today was selected as Galicia’s “national” day some time last century, combining the feast of the apostle Saint James, supposedly buried in Santiago de Compostela, with a celebration of the Galician homeland. The name Santiago de Compostela means something like Saint James of the Field of the Star, commemorating the legend that a star shone down to indicate where the bones of the saint were buried, after having floated to Galicia from the Holy Land in a stone boat.

All right, it may sound a little far-fetched but there it is. Pilgrims make their way to Santiago from all over the world, carrying their pilgrim poles and following the path marked by scallop shells, the shells which the original pilgrims used as platters to eat their food at hostals along the way.

Nowadays some people cheat a little and have their luggage transported for them from place to place while they make their way on foot or in some cases on bicycles. The most devoted, however, do it properly with their luggage in their back, gaining certificates as they go to prove that they have walked the walk. Eventually they attend a service at the cathedral in Santiago where all who have completed the Way are blessed by the bishop.

A couple of years ago I met a pilgrim who had walked all the way from somewhere in Eastern Europe with her rucksack and her pilgrim’s staff. She was on her way to the airport to make her way home by plane. Impressive! 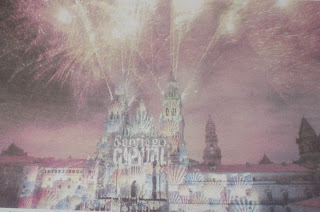 On the Saint James’ eve, the cathedral is illuminated at around midnight with a huge display of fireworks. It is worth standing squashed into the Plaza do Obradoiro, if you are lucky enough to get in there as the crowds are huge, or in one of the streets leading onto the square, as we did two years ago. The display is impressive and photos and videos do not really do it justice.

Earlier this week, pilgrims and tourists were having to buy raincoats if they did not come equipped as the rain lashed down – Santiago de Compostela is, after all, the rain capital of Spain. Yesterday, however, the rain kept off and although apparently not without some technical problems the show went ahead as usual.
Posted by Anthea at 05:17